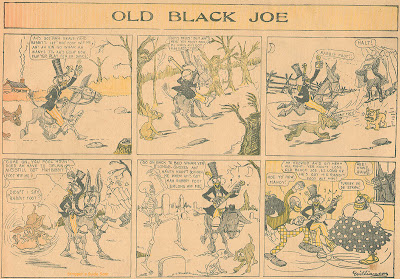 Maybe some obscurities are better left unearthed, but for better or worse here we have Old Black Joe. If not for all the racist trappings this would be a delightful strip. The gag is strong, Joe is a funny fellow, his song is snappy, and the art is crude yet exuberant.

Old Black Joe ran in the World Color Printing Sunday sections starting on December 1 1907. It ran semi-regularly until April 26 1908, then disappeared for a long time before two final episodes appeared on November 22 1908 and February 7 1909. Alfredo Castelli has the series running in 1910 in Here We Are Again, but I've not seen it in the 1910 WCP sections.

The creator of Old Black Joe signed himself only "Williamson", and sometimes didn't bother signing at all. There were at least three Williamsons working in newspaper comics in the first quarter of the century, but I don't know which if any of them this might be. Frank M. Williamson had a vaguely similar style (if you call utter primitivism a style), but I wouldn't bet a nickel on that guess being right.