Obscurity of the Day: The Original Boop-Boop-a-Doop Girl 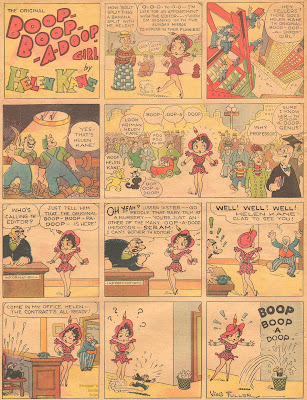 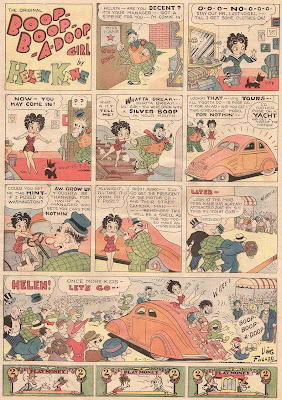 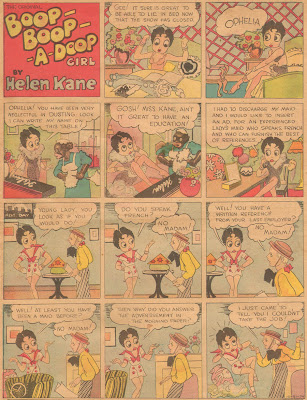 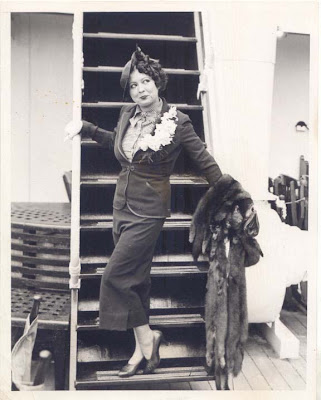 As promised yesterday, here's a very interesting obscurity. So interesting that Cole Johnson and I both had the idea to scan some in at the same time. As I was putting a couple into the queue Cole sent me a third, plus a photo of the 'writer' and subject of the strip. Since Cole is the film historian, let's hear what he has to say about The Original Boop-Boop-a-Doop Girl:

The singer Helen Kane was a briefly popular entertainment oddity in the late 20's. She made a few Paramount film appearances at the time, and the animators at Max Fleischer's cartoon studio adapted her persona into the Betty Boop character. Since Fleischer's films were also released by Paramount, it may have seemed initially as good, solid cross-promotion. Unfortunately, Kane's career ran out of steam very soon, her last film being a 1931 short subject. However, "Betty Boop" took off, quickly eclipsing her inspiration's career. Helen Kane felt reparations were in order for purloining her mojo, and sued the Fleischer studios in April, 1934. Somehow the judge in the case couldn't see how anybody could see Helen in Betty, (Maybe the only one in all christendom), and Fleischer and Paramount won the case. They even thought it a suitable publicity event for a jokey segment in the Paramount newsreel!

The Betty Boop comic strip started in July, 1934, for Hearst's King Features Syndicate. Behold this item, "The Original Boop-Boop-a-Doop Girl by Helen Kane", by Ving Fuller, from the August 12, 1934 issue of Hearst's N.Y. Mirror. (The only one I have-can you supply the dates on this?) Why was this out-and-out rip-off of the Betty Boop strip that Hearst also ran? Did this run in any other papers? This is a classic example of a pre-fab promo strip. Really too little too late for the sadly stalled Helen Kane. (Hmmm-Just this one example seems more fun than the dismal stiff that Counihan and Seeger put out.)

The New York Mirror (and only the Mirror) ran this strip from August 5 to October 21 1934. According to one historian, this strip was running while Hearst waited to get the rights to the real Betty Boop. Well, obviously t'ain't so because Hearst started running the daily version of the Betty Boop strip a month before the debut of this competing version. In fact both strips ran in Hearst's New York papers -- the 'real' one in the Journal, the fake one in the Mirror. Really kind of fitting that the sleazy tabloid got the knock-off, don't you think?

The strips shown above are the first, second and last episodes of the strip. As you can see the early ones were drawn by the always goofy and delightful Ving Fuller, but later on they got the janitors and office boys to produce the thing.

Comments:
I read director Samuel Fuller's excellent autobio, A THIRD FACE, and discovered Ving was Sam's older brother and drew cartoons for Sam's film on turn-of-the-century New York journalism, PARK ROW. Sam himself was no slouch at the drawing board and drew an occasional cartoon for the New York Evening Graphic between crime reporting assignments.

Yet another reason I'd love to see Park Row. Unfortunately it is not available on video as far as I know.

Wow, I love the one with Helen sliding down the back of the car. Granted, the Helen version came a day late and a dollar short, but it just looks like such an amazing joy ride. Thanks so much for digging out this obscurity - it sure didn't deserve to be one. Heck, if we could have two sets of Katzies legally, why not two sets of boop-a-doop girls?

Caniff was far too busy with Mister Gilfeather and Dickie Dare over at AP to be messing with a hack job like this. I agree, though, that the style is just a little familiar (especially on the new maid). It would probably be someone in the King bullpen, maybe Jack Callahan after a long night on the town?

Wow, These are great. I'd love to see Helen Kane on video. Anyone know where it may be available online (if available at all?)

Hi Mikalyn --
Just go to youtube and search on Helen Kane. There was at least one there that I watched awhile ago.

Fred Lasswell once told me that "Ving Fuller had more syndicates than newspapers." This is probably true.

There was an Al Capp Sunday Abner strip where Abner's son was drawing, and his mother said "Maybe the boy will grow up to be a famous cartoonist like Ving Fuller or Walt Kelly!"

The boy answered, "Who's Walt Kelly?"