Obscurity of the Day: Out of the Inkwell 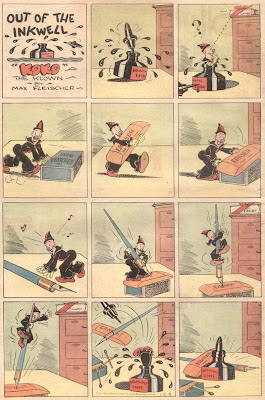 The New York Hearst papers became quite the hotbed of Fleischer Studio activity in 1934. At the same time the New York Journal began running the Betty Boop Sunday comic strip they also started this considerably more obscure Fleischer product, Out of the Inkwell. Since the sample of this rare strip came from Cole Johnson, and he knows his animation history about a hundred times better than me, let's hear his take:

Here's an example of an oddity. Out Of The Inkwell is based on Max Fleischer's brilliant silent animated series of the same name. In each episode of the animated series, the character of Koko the clown would emerge from an inkwell, in effect a cartoon character playing the part of a cartoon character. Koko usually enjoyed tormenting Fleischer himself and causing all manner of chaos, superimposed on live-action "real world" footage. Each film's coda had Koko being brought back into the inkwell, of his own accord or otherwise. The last of these cartoons was released in 1929, but Koko appeared in some of the studio's cartoons from 1931-34, usually with Betty Boop. Apparently, with the introduction of the Betty Boop strip, they felt it the right time to launch a second effort. Both the Koko and the Betty strips were drawn in a corner of the Fleischer studios in mid-town Manhattan. They were drawn by down-on-his-fortunes, alcoholic cartoonist Bud Counihan, and written by the teen-aged future comic book artist and animator Hal Seeger (perhaps best known for the "Milton the Monster" cartoons). This is from the N. Y. Journal Saturday comic section, Dec. 8, 1934. I don't know if it appeared anywhere else, or how long it lasted-probably not long! Can you fill in the dates, Allan?

You bet, Cole, and thanks! Out of the Inkwell ran in the Journal, and almost certainly no other papers, from November 25 to December 15 1934, a grand total of just four episodes. I'm pretty sure about that crack about no other papers because I don't believe Hearst had any of his other papers outside NYC try out the tabloid comics section experiment until well into 1935 (or am I wrong?). By the way, if you want to read more about that tabloid experiment be sure to pick up the current issue of Hogan's Alley and read Bill Blackbeard's article.

And if you think this is a real oddball, tune in tomorrow for another strip with a decidedly bizarre Fleischer Studios connection.

Comments:
The Hearst chain had a few tabloids, like the NY MIRROR and Boston DAILY RECORD, but the "PUCK" brand of section tabloid experiment started in February 1935, and ended in August.