Obscurity of the Day: Private Will B. Wright 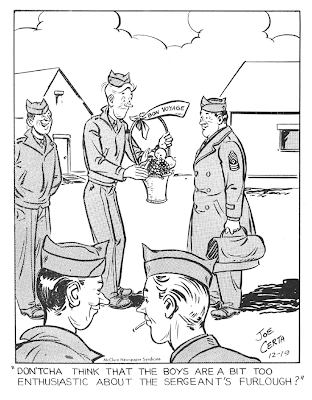 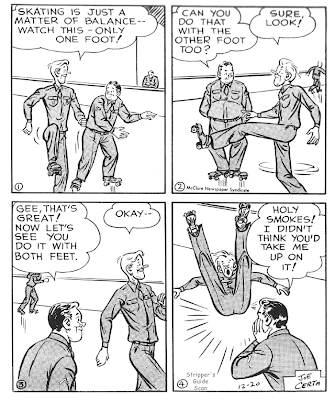 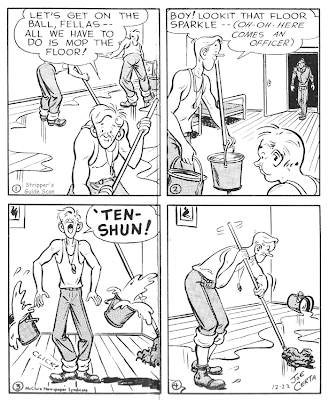 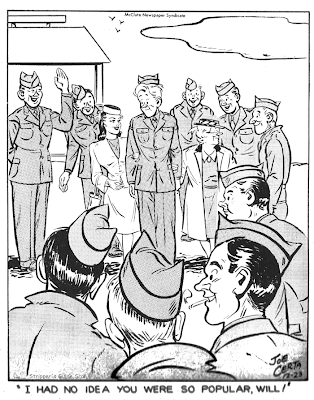 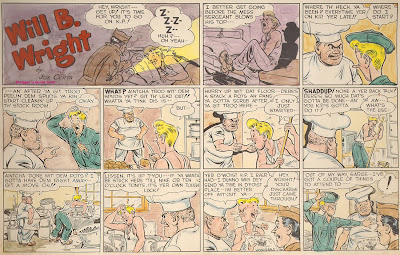 Private Will B. Wright was a rather undistinguished 'me-too' feature, one of dozens of strips and panels about military life that were created during World War II. The panel was a real latecomer, starting on December 18 1944, a scant six months away from the end of the war. No matter, though, because Private Wright was apparently in the same camp as Beetle Bailey would later inhabit -- in the middle of a war he never left his base.

When the end of the war came, creator Joe Certa did his darndest to keep the panel going. Private Wright was mustered out, went home to mama and got a job. What worked for some other military strips didn't keep this strip out of the cancellation crosshairs, though. The latest known appearance of the daily panel was in September 1945.

Certa tried to sell his syndicate, McClure, on the idea of a Sunday page version of the feature. He produced at least six samples (all hand-colored as the example above) but as far as I've been able to determine the idea met with no interest.

Certa went on to uncredited work on the Joe Palooka strip in the 1950s, and did get a byline on the short-lived Straight Arrow strip. He also did a lot of work in the comic book industry.

Comments:
Notably, Certa was the co-creator of J'onn J'onzz the Martian Manhunter, who would become one of the early members of DC's Justice League of America. Although strictly a second-stringer, J'onn J'onzz's early adventures as a backup character in DETECTIVE COMICS and later as a headliner in HOUSE OF MYSTERY have been collected in two volumes of SHOWCASE PRESENTS: MARTIAN MANHUNTER. That's roughly 1,000 pages of wall-to-wall Certa, if anybody is so inclined.