Obscurity of the Day: The Adventures of Little Allright 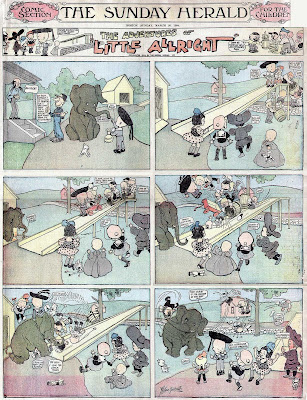 The Boston Herald just couldn't make up its mind whether it wanted to run a syndicate or not in the first decade of the previous century. Their homegrown comic section was born and died at least four different times in the course of that decade.

The Adventures of Little Allright came in the third version of their Sunday section and ran from March 6 to June 26 1904. There really wasn't much to set the strip apart from any other kid strip -- the starring kid saying "all right" a lot seems an almost ridiculously weak hook. Wallace Goldsmith, primarily an editorial cartoonist and practically a Boston institution (over his long career he would be featured at the Herald, the Post and the Globe) took the dubious credit for this stinker.

Goldsmith resurrected his strip in the fourth generation of the Herald's Sunday section, too. It was renamed slightly, now just Little Alright (note the second 'L' was dropped). This time the strip ran from November 11 1906 to April 14 1907.

A tip of the hat to Cole Johnson for the sample strip.

Comments:
Don't know where this fits in, but I have an original "Little Allright" handcolored sunday strip from 1907, which has a second "L" in the title. Maybe Goldsmith forgot it was only supposed to have one "L"! Anyway, thanks for the info, it is very helpful. Here is a link to my Little Alright strip: