Obscurity of the Day: The Adventures of Judy 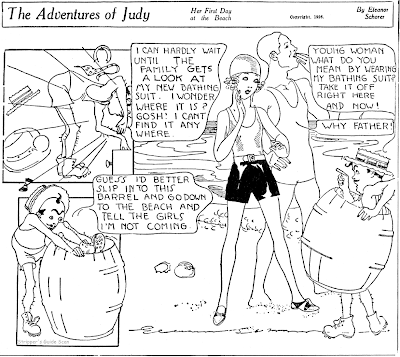 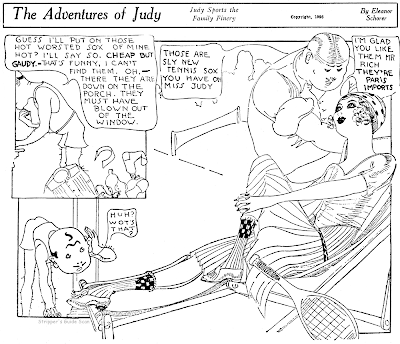 Here's a feature I just discovered; several tearsheets were lurking in a pile of miscellany that I've been working through. The Adventures of Judy was by Eleanor Schorer and ran in 1926. Beyond that it's mostly guesswork. The samples I found were from August issues of the San Francisco Bulletin. Searching on NewspaperARCHIVE yielded a few more samples from October in the Logansport Tribune. The series was not advertised in Editor & Publisher.

Based on this sketchy information it appears that the feature was available something like 2-3 times per week. Although the samples above might lead you to believe that the feature was primarily a commentary on fashion, others show that the strip was about the romantic entanglements of a flighty rich girl and her many beaus.

The syndicate responsible for this feature is the tougher mystery to solve. There are no syndicate stamps on the samples I've found. I can only limit the likely possibilities to three.

Eleanor Schorer was long associated with the New York World (she has many features to her credit there back in the 1910s) and was definitely still working for them as late as the 1920s, when she ran some sort of radio-newspaper crossover children's feature called Kiddie Klub.

However, in 1926-27 a feature called Mother Goose by Schorer was advertised in E&P, and it was distributed by the Columbia Newspaper Service. I haven't been able to locate any samples of this feature, but it shows that she was no longer working exclusively for the World.

The third possibility is that the feature was from a Hearst syndicate. The feature conforms to the typical look and size of one of Hearst's romantic cartoon offerings, and Schorer was married to a Hearst executive who was involved in syndication. Is this feature merely an entry in their long-running romantic series?

So which was it? Darned if I know. Anyone have some wisdom to share on this feature?

Comments:
Wearing a barrel when you have no clothes is such an odd idea. I wonder where it comes from. Is it a purely comic strip convention?

Lyn asks a good question. Where did the barrel begin? In old political cartoons wearing a barrel is usually connected to financial hardship. A person has lost everything including the clothes off his back, and all he has to wear is an old barrel he found lying around the farm. I don't know how far back that tradition goes.

Hello, Allan----Some pretty weird-looking art here. Why didn't the guy just put his clothes back on, instead of wearing a barrel out onto the beach?--Cole Johnson.