Obscurity of the Day: Was There Ever a Boy Like Barney Blue? 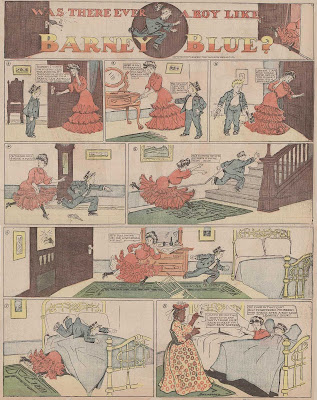 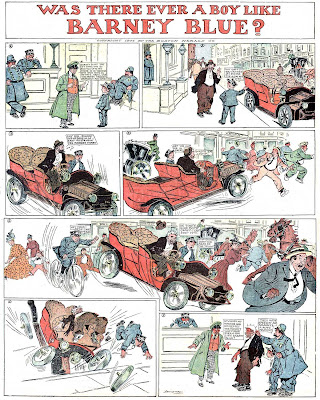 Walter Gallaway produced Was There Ever a Boy Like Barney Blue?, a full page Sunday cover feature for the Boston Herald. It always ran as a full pager, a good thing because the title might well have taken up the whole space in half-page format!

Barney seemed to be a telegram delivery boy, though today's samples don't have him operating in his professional capacity. Like many of the Boston Herald's features in their 1906-07 incarnation, the art was superb and the plots were either senseless, hacky, or just plain not funny. Gallaway seemed to think that his customary tagline on the strip was a fine grace note, but often it didn't even make sense, as in the top example here.

Barney Blue ran from May 6 1906 to March 31 1907 in the Herald, but the feature ran longer in the syndication, as late as April 26 1908 in one paper. My assumption is that the syndicated material was actually reprints from the original Herald run, but I haven't had the opportunity to do a comparison.

Gallaway seemed to be stuck on newspapers called the Herald. He left a three-plus year stint at the New York Herald to join the Boston Herald. Barney Blue was his only feature in Boston. He was also a prolific contributor to the satirical magazine Puck.

Tip of the hat to Cole Johnson for the sample scans.

Comments:
You're right, the jokes aren't much, but Gallaway's art is very nice. I love these full pages where there was room enough to fill a panel with local color, like the single panel filling the third row.

Was there ever a boy who spoke in the wrong balloon order like Barney Blue?