Obscurity of the Day: It Happened In Birdland 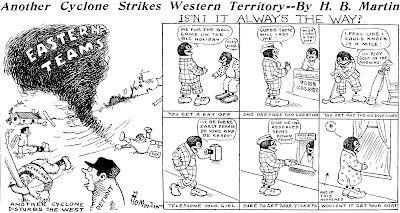 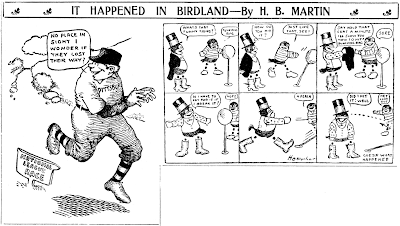 Fired by his successful introduction of the Weatherbird feature at the St. Louis Post-Dispatch, Horace B. "Harry" Martin set his sights on New York. He arrived in 1903 and, surprisingly enough, immediately got a job with the Hearst papers (which is odd since the P-D is a Pulitzer paper -- you would have thought he'd go to work for the World). Other than a few Pulitzer jobs Martin spent most of the next decade turning out material for Hearst, none of it to any particularly great renown.

His longest-running feature was It Happened In Birdland, a return to the Weatherbird character that had spurred his ambition in the first place. As you can see from the samples above the strip was often an accompaniment to a sports editorial cartoon.

When the feature debuted on April 12 1907 in the Evening Journal it was titled A Little Bird Told Him To, but that title was dropped in favor of It Happened In Birdland on April 29. As was typical for the day, though, the feature was often untitled or had a one-off title of the day.

The initial run of the strip ended January 16 1908, and Martin did no series at all for over a year (his sports cartoon may have continued, but my files are mute on that question). Then on February 26 1909 the strip reappeared, this time running on the center stage of the New York American. There the strip ran until September 7 1909.

Thanks again to Cole Johnson, the scanning demon, for these samples.

Comments:
very cool...reminds me of Heckle and Jekyll...thanks for some light in the current news tunnel...qloqee