Obscurity of the Day: Adventures Of Lovely Lilly 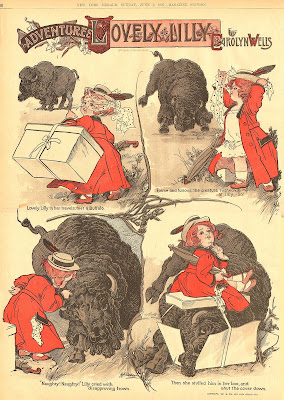 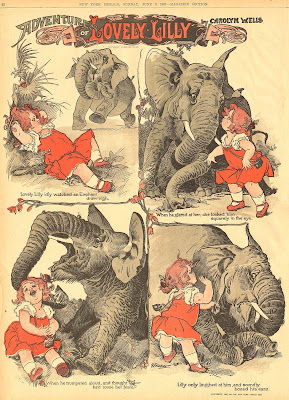 People sometimes ask me, "what's your favorite strip?" That's an awfully tough one to answer, because I like a great many strips for a great many different reasons. I usually answer Bringing Up Father, since the combined level of humor and art is so fabulous. But if the question were rephrased, something like "if you were stranded on a desert island and one strip washed up on the beach once a week, what strip would you pick?" I might just have to go with Adventures of Lovely Lilly. Not many episodes of this obscure classic were produced, but if I could get a new installment of this strip once a week I'd be one contented castaway.

Some of you were introduced to this bizarre strip many moons ago in Rick Marschall's Nemo magazine (issue 27 to be precise) as I was. Just six strips were reproduced in that magazine, in black and white, but boy did they make an impression on me.

Each strip is a pithy four panel tale told in classic storybook fashion. It stars the most darling little flower of a girl, evidently not much past toddler age. She wears clothes that would be the envy of any expensive porcelain doll. In each strip our poor little darling Lilly is menaced by a ferocious jungle beast. Oh no! What will our little heroine do? Is Lilly rescued by some heroic feller? Does she reason with the jungle beast, or pull a thorn from its foot? Mmmm, not quite.

What our little waif does is put some serious beat down on that animal. I'm talking treatment that would make a slaughterhouse worker woozy. I'm talking the kind of cruelty that would put a PETA member in therapy for years. And she does it all while wearing that beatific little china doll smile, the sort of expression that makes mommas use up a roll of film in the ol' Instamatic.

But if the deliciously bizarre plot of the strip isn't enough to place it in the hall of fame, the artwork provides the final vault up into the highest ranks. Is it too hyperbolic of me to say that this is some of the most beautiful line art ever to appear in a newspaper? Take my word for it that you do not get the full effect either here or in the old Nemo magazine. These incredible full page strips are absolute heaven to behold in their giant original glory.

But enough of my fawning. We've got stats to cover. Adventures of Lovely Lilly ran in the magazine section of the Sunday New York Herald. The feature started in December 1906 (this date is per Marschall, I haven't seen any from before January 1907). It ran until January 27, then returned for a second engagement from May 19 to June 9 1907. The strip was written by Carolyn Wells, a popular humorist who did the writing duties on a large number of Sunday magazine cover comics (though none at all like this). The art was by a fellow named G. F. (George Frederick) Kaber in apparently his only experience slumming in newspaper comics.

Comments:
Lambiek.net also has some gorgeous B&W panels from this strip on its site. Do you know if those are just bleached-out versions of the colour Sunday pages, or if that ran in a different format?

Hi Hugo --
The ones on lambiek are reproduced from the black and white Nemo magazine article. All the originals were in 2-3 colors.

Cole -- no, didn't know about the postcards. How weird to do postcards for such a limited run series!

We moved house into a little village in Co Durham UK over 25yr ago and found undoor floorboards a copy of the new york herald including a lovley lilly illustration. Unfortunately it had deteriorated a little so I had it stuck onto a back board and framed as I loved it so much. It is dated Sunday 19th May 1907. Lovely Lilly with Wolf in colour.