Obscurity of the Day: And He Did 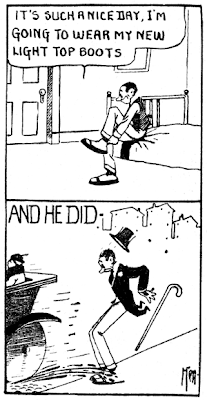 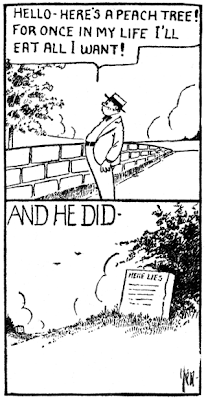 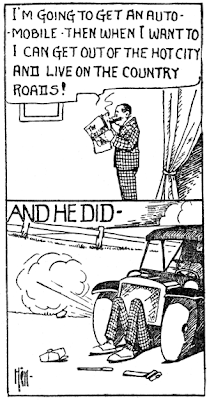 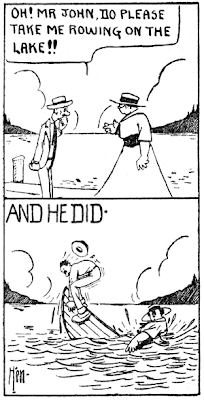 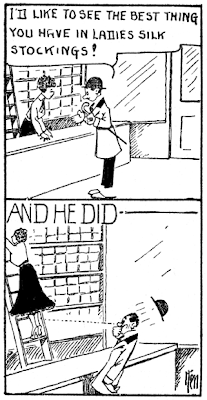 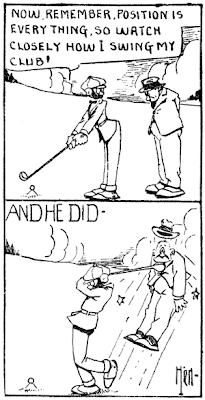 And He Did seems like a pretty unassuming bit of fluff, but when viewed in the context of the era in which it ran I think you've really got to hand it to the creator for his vision.

The earliest appearance of And He Did I've found is in the December 8 1913 issue of the Philadelphia Record. The strip was syndicated by Associated Newspapers, that newspaper co-op that shared material between a half-dozen or so papers. I can't tell if And He Did was actually a Philadelphia-born strip for sure, but I think it was. The creator, who signed himself only "Hen", is, I believe, J.C. Henderson. The strip ran until at least October 1917, and I suspect that it ran longer (unfortunately my files of the paper run out at that point, and other Associated clients didn't run it this long).

So, to paraphrase the elder Bush, what about this vision thing? Well, many of the strips of this era were big unwieldy things, usually overloaded with long speech balloons and gags that practically suffocated under all the trimmings applied by the cartoonists. Just look at yesterday's obscurity for a typical example of gag bloat.

Henderson used many of the standard gags that you'd see related in 5 or 6 panels with 100 or more words of copy, but he'd do it in just two panels, and the second one was mute except for the title! Henderson's approach prefigured what many cartoonists wouldn't figure out until space constraints finally forced them -- as Shakespeare said, brevity is the soul of wit.

Comments:
Heh, I think many cartoonists these days haven't even learned to cut out all the fluff. Many three or four panel strips only really need one panel to tell their joke sometimes.

Hi MJ (is that you Mark Johnson?) --
Any impression as to whether the Herald was running its daily material late? I'm always suspicious of the timing in those western papers in the early days.

Thanks for the info, though, I'll make a note of that in the listing for the feature.

By the way, I completely forgot to say in the post that a second run of the feature was through the Keystone Feature Service. That run was approx. 1921-26. Cole Johnson thinks this run, which was unsigned, was probably the work of Joe Doyle.