Obscurity of the Day: The Gimlet Club 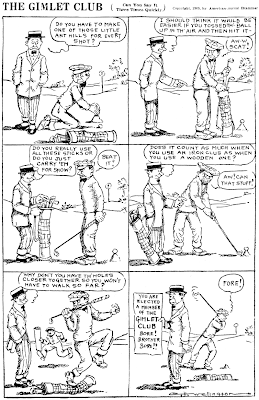 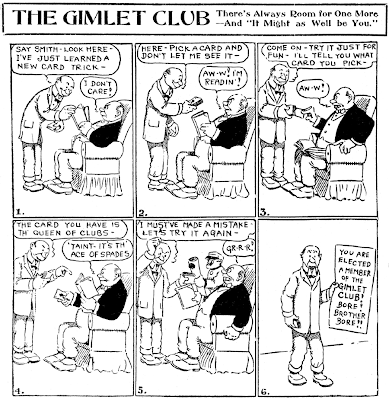 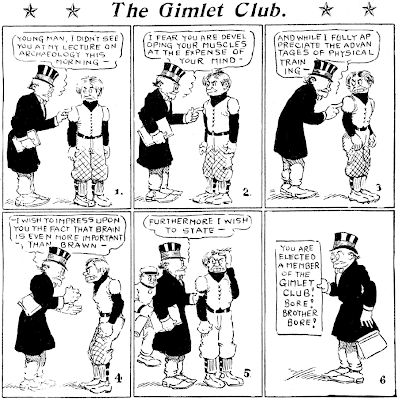 From Charles H. Wellington, that font of obscurities, today we have The Gimlet Club, yet another of the series he did for the New York Evening Journal. This one ran from January 10 1909 to January 31 1910.

The plot of the strip is simple. Some long-winded pecksniff bores his poor victim to distraction, then a messenger appears with an official membership card in the Gimlet Club. But why "gimlet club", you ask? Did Mr. Wellington have some special dislike for gin and lime cocktails? Perish the thought that a newspaper man of those halcyon days would ever speak unfavorably of spirits. Let's do some research!

In fact, it turns out the gimlet referred to isn't a drink at all, it's a hand tool used for boring holes into wood. Here's a picture of one on Wikipedia. Get the gag? Okay. But wait, there's more! The interesting bit is that Wellington didn't originate the concept. I've found references to Gimlet Club and the motto "Bore, brother, bore" as early as 1907 with a Google search. There were novelty tokens in circulation at the time imprinted with "Gimlet Club" and the motto. The name and motto were even taken up by the U.S. Army's 21st Infantry Regiment (they date the moniker to the 1920s, but I'd bet they're a decade late).

My guess is that the Gimlet Club was thought up by someone as sort of an adjunct to another fad 'club', the Ananias Club, which was also well-memorialized in the comics (and perhaps even originated there) in the early oughts. Here's a great early example by Outcault. I saw at least one contemporary reference to the Gimlet Club cozying up to a mention of the Ananias Club, a bit of slang that means a foolish liar.

Phew! Enough research for one day! If you just can't get enough of The Gimlet Club, you'll find additional selections from the series over on the Barnacle Press site.

Comments:
hello, I need some info on a few strips. In my attempt to fill in gaps of some strips I am gathering, I came across a page of some very odd strips from the Urbana Daily Courier in Illinois. If you may, would you review the images I have and fill me in on these. I have come up blank online, and nothing surfaces on Google that gives me any ideas as to what they are or if they are knockoffs or copycat strips. -Mr ilovecomix

Hi ilove --
Looks to me like you've identified them all correctly. Assuming the file names are dates, you're seeing all these after their original runs, being sold in batches by reprint syndicates (probably US Feature Service in this case).

one last question, do you know the original runs of these strips? You stated they were in reprint and I was curious as to when they originally ran?

Dorothy Darnit -- original run 1919 to apparently mid-20s. Very hard to say because it seemed to be running in reprints even when new material was being produced.