Obscurity of the Day: Val the Ventriloquist 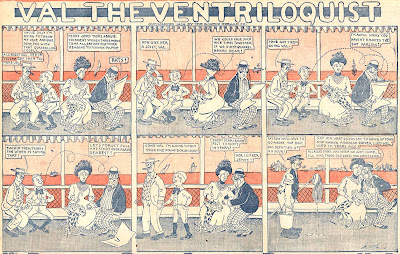 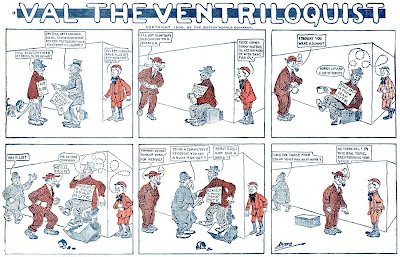 Here's another obscurity from the Boston Herald. Unlike most of the Herald's offerings, Val the Ventriloquist actually served up a smidgen of something akin to humor, a nice change of pace at that paper. Most of the Herald cartoonists were better known for their drawing ability, whereas Frank Crane, veteran comic stripper, actually knew the ins and outs of gag construction. Here he takes a kid ventriloquist through his paces. Val throws his voice to right wrongs, make the world a better place, and occasionally create a little good old-fashioned mayhem. The plotlines are very similar to that Boston mainstay, Billy the Boy Artist, just substituting a kid with voice-throwing ability for one who can execute trompe l'oeil paintings. Val the Ventriloquist ran from August 26 1906 to August 30 1908.

Crane is best-known for his boy inventor strip, Willie Westinghouse Edison Smith, that he did for many years at the Philadelphia North American, but he also did work at the New York Herald and a few small things for World Color Printing. For years I thought the guy's name was Drane because of his weird signature. Once I got that mystery cleared up then I puzzled over whether he was also the Frank Crane who was a famous psychologist and newspaper columnist of the day. He wasn't.

Comments:
Didn't MUGGSY and WILLIE WESTINGHOUSE appear in both The Piladelphia North American and the New York Herald's syndicates when Mr. Crane served as comics editor in those organizations?

Hi Mark --
Not simultaneously, of course, but yes. Muggsy was particularly weird, as it started in the North American, then switched to the Herald, and then back again.