Obscurity of the Day: Adventures of Peck's Bad Boy 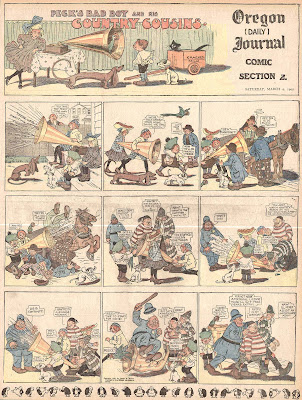 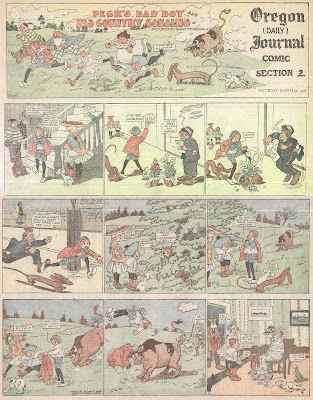 George Peck created Peck's Bad Boy as a series of humorous stories in his Milwaukee-based weekly newspaper, Peck's Sun, in 1878. Although originally published in a rather obscure venue, the stories gained a huge nationwide audience when they were collected in book form. The Bad Boy, as the name implies, was a kid who loved to get in trouble, more or less a rural American version of one half of Max and Moritz.

Although rarely cited as an influence on early comics, the popularity of the Bad Boy likely had as great an impact on American cartoonists as Wilhelm Busch's creations. Certainly Peck's books were outselling the Max and Moritz reprints in this country by a wide margin.

The Bad Boy left the comics page field to his many doppelgangers until 1906. That year Joseph B. Bowles, Peck's publisher at the time, licensed the character's use in comics. The Sunday page began on June 10 1906, distributed by Philadelphia's North American Syndicate and penned by their star cartoonist, Walt McDougall. The series went on for exactly one year, ending on June 9 1907.

According to the Overstreet Price Guide there were no less than nine contemporary reprint books featuring the strip. I assume the material they reprint overlaps somewhat since there were just 52 pages of material available.

The series seems to have done well, popping up both in papers that took the North American service for their whole section and those that used other services. That combined with the number of reprint books would seem to classify the series as a success, but for reasons unknown the contract was not extended. Perhaps Peck wanted too much money at the renewal.

Purely a guess, but maybe the actual reason was that Peck was unhappy about the way McDougall handled the work. The strip reads very much like a purely McDougall production, I very much doubt that Peck wrote the material. Not having read Peck's stories, I can't say how well he followed Peck's lead but McDougall's stylistic stamps are in abundant evidence.

Thanks very much to Cole Johnson, who supplied the samples above.

Comments:
I have read a number of the stories in an old collection. They're told first-person by Peck's Bad Boy, and completely focused on son vs father. The father is selfish and vain and often drunk, the son full of the kind of mischief that would lead to juvie hall these days, and by the end of the chain of escalating events, the father is usually ready for the hospital. Not at all gang of kids oriented.

Thank you Chris! I think that bolsters my argument that McDougall went rogue on the assignment, probably annoying old Mr. Peck no end. Didn't stop him from taking the royalty checks I imagine...