Obscurity of the Day: Fitzboomski the Anarchist 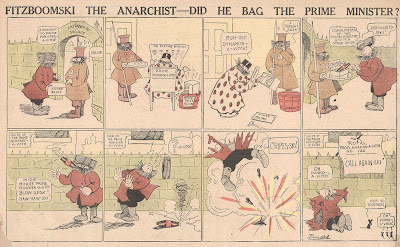 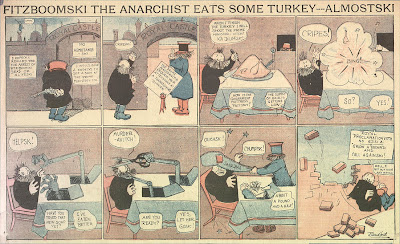 Anarchists, popularly known as crazed bomb-throwers to middle-class Americans, had become a national obsession following the 1886 Haymarket riot in Chicago. A group of anarchists and trade unionists had staged a rally in the city only to be harassed by police. In the ensuing melee someone set off a bomb that killed eight police officers. It was impossible to determine the actual bomb-thrower, but police took the convenient shortcut of arresting eight rally organizers and charged them with the crime. Seven were executed while the eighth committed suicide in jail.

From that date on socialists, unionists and other assorted 'radical' groups were all branded anarchists and excoriated in the popular press as wild-eyed maniacs. Things only got worse for these groups, most of which, at least in the U.S., were actually social reformers and not revolutionaries, when the eyes of the world were focused on troubled Russia in 1905. In that year a large number of disparate groups, including anarchists, Bolsheviks and a plethora of splinter groups staged the Russian Revolution of 1905. That title makes the events of that year sound like an organized effort, but it was actually utter chaos, with bombings, assassinations and terrorism directed not only at the government but between and among all these groups as well.

The headlines coming out of Russia further defined anarchists in the U.S. as crazed bomb-throwers. Along with hatred, contempt and fear, the image of the insane bomb-throwing terrorist also inspired the type of black humor seen here in Walter Bradford's Fitzboomski the Anarchist (you thought I'd never get to the strip, eh?).

Bradford's new strip debuted in the Philadelphia North American on October 22 1905, just a week after Russian revolutionaries had presented the czar with the October Manifesto, which promised to end the violence in exchange for basic civil rights for citizens. Bradford, a born jokester who could find the humor even in the dark events on the other side of the globe, had Fitzboomski trying all sorts of nefarious plans to blow the "prime minister-a-vitch" to bits. In plots that prefigure Mad magazine's Spy vs. Spy, his plans were constantly subverted by the minister's own counter-plots.

With the October Manifesto signed by the czar, (relative) peace came to Russia and Fitzboomski threw his last bomb after just six episodes on November 26 1905. But in January 1907, with tensions in Russia once again coming to a head, Bradford reactivated his home team for a second engagement. The new version of the strip, now slightly retitled as Fizzboomski the Anarchist, ran from January 20 to April 7 1907 (except for an apparent leftover that didn't appear until June 28 1908).

A tip of the ushanka to Cole Johnson for the scans.

Comments:
This is another one I've been wondering about. I have a few of these, I think they must be from the revival.

So sad that you speak so fondly of scum, socialist and their "progressive" ilk.