Obscurity of the Day: Jokes That Really Happen 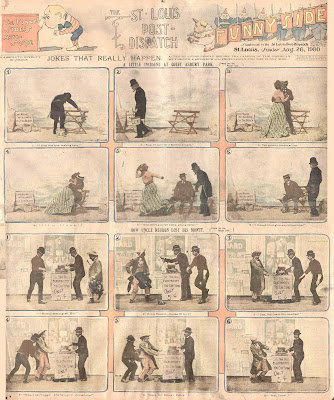 After Wednesday's obscurity post got flack for not being obscure enough, I feel the need to tip the scales way back in my favor. Jokes That Really Happen ran for only two episodes on August 26 and September 2 1900. The images above come from the St. Louis Post-Dispatch, though we assume that the feature also ran in the New York World. We can't say that with absolute certainty since Ken Barker's World index does not include them, but I'm assuming that's because there is no cartoonist to credit (his World index was organized by cartoonist names). Since this very short series is actually a photo-comic based on real films of the day, I defer to Cole Johnson, who is not only a newspaper comics maven but also a renowned expert on silent films:

The first American motion picture companies were established in the late 1890's. The film scenes shown in the Pulitzer Funny Side comic section in 1900 were produced by the American Biograph and Mutoscope Co., later to become the MGM of the nickelodeon era with the entrance of D.W.Griffith eight years later. It's name was later shortened to simply the American Biograph Co. Poor management choices (like firing Griffith) led to the company's demise in 1916. The films here were still intended to be seen in a mutoscope machine, as shown being watched by one of Paul West's Roly Poly characters in the masthead of the first episode. Projecting film upon a screen had yet to become the dominant film venue.

The actual titles of these primitive masterpieces (despite the names given) are:

How The Young Man Got Stuck at Ocean Beach (released May 1900): A cop uses glue to nab some serial "spooners" by shmutzing up a bench. Another Victorian trespass against having a little fun.

A Farmer Who Could Not Let Go (released May 1900): Back then it was thought that mild jolts of electricity shooting through your body was good for your health. Small battery-run sets were sold for home use. One would hold two conductors wired to the battery as someone you trusted would control the dose given. This film shows a large fairground sized electricity machine. As in many, many cartoons of the era, the victim is given a blast so powerful, he gets paralyzed like a statue, prone for any larcenous mischief. I wonder though, wouldn't the thief become spontaneously frozen as well, the farmer's body acting a conduit for the juice? And how much did the electricity set-up cost to set up and run, just to abandon once they rolled a random hayseed? One really shouldn't waste too many brain beams on it, I guess.

The Burglar-Proof Bed (released July 1900) A home invasion is thwarted when a Murphy bed turns into a stone fortress. A tiny cannon blows away the thug, and we get a salute from the goofy bed-owner and the American flag pops up! This guy's been waiting for this for years!

All of these short films are quite similar to the comic strips of the era. Brief, mindless, cause-and-effect affairs with stereotypes and quick blasts of violence. I'm a-wondering if these were the first instances of photos as a comic strip?

I wonder the same thing, Cole. Are these truly the first fumettis, or photo-comics, to appear in American newspapers, or for that matter, published anywhere????

Comments:
Since the other day I gave you some grief, I thought today I'd ask a favor.
Every time I read about Barker and his index I immediately plan on getting the few (obscure?) Inks issues I don't have. Ohio State used to have a website where one could order those, but now I can't find it. Can anybody direct me?

By the way, nice obscurity today.

Gee, I had no idea they were available after the original publication dates. I'd love to fill out my run as well, missing several issues I think.

Hello, Allan---If an artist should need be assigned to JOKES THAT REALLY HAPPEN, then in the 9-2-00 episode, it was Paul West who did the lettering and the little burglar head at the upper right.---Cole Johnson.

"we assume that the feature also ran in the New York World. We can't say that with absolute certainty since Ken Barker's World index does not include them,"

Nicholson Baker included the Aug 26, with a NY World banner at top, same date, in his big book The World on SUnday, which you reviewed a couple of years back

in fact, re "not being obscure enough", this is the first 'Obscurity of the day' that I've actually seen before.

ARF!
it's funny because I know you know more about this stuff than I do.
The page stuck in my head for the same reason you remarked above. It's an interesting if isolated early example of 'fumetti' or photo-comics. When in Italy last month I asked somebody about the Italian photo-comics. I shouldn't have mixed this up with the chianti, but I seem to recall it was something to do with not being able to import the American comics just after the war, and also the state of the Italian film industry at the time. The fumetti business was big enough that actors could make small but worthwhile careers out of it. Anyway, using 'fumetti' in the instance of the NY World page would certainly be an anachronism. And if I've got it all wrong, somebody please correct me as I'd like to know.