Obscurity of the Day: Bonzo 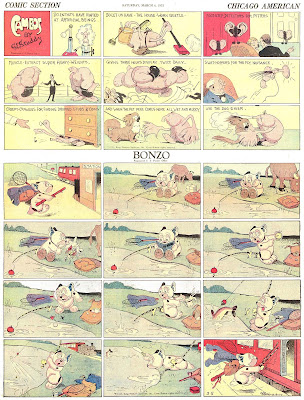 George E. Studdy was a successful British cartoonist whose career began in the first years of the 20th century. His work appeared regularly in high-profile venues like The Sketch and The Tatler long before he created his signature character, a dog named Bonzo. In the 1910s some of his cartoons featured an unnamed dog character, and this pooch caught the eye of The Sketch's editor. The editor suggested that George further develop the dog as the star of a regular series, and a phenomenon was in the offing. Although the series began in 1921, the dog didn't even have a name until late in 1922, when the "Studdy dog" was finally dubbed Bonzo.

Bonzo was heavily merchandised in England and there are still collectors today searching out the innumerable Bonzo postcards, salt and pepper shakers and all sorts of other gewgaws emblazoned with his image. A wonderful website, Bonzo and George Studdy, from which many facts in this post were cribbed, does a great job of covering Studdy's career, Bonzo's print appearances and the merchandising. I highly recommend you go take a promenade through its pages.

Practically before the ink had dried on the first 'official' Bonzo cartoons (that is, the ones in which the dog is actually named) Studdy's character invaded U.S. shores under the command of the Hearst organization. The American Weekly, Hearst's Sunday magazine supplement, began to sporadically feature Bonzo on its covers under the running title A Dog's Life. The first cover so graced was dated December 17 1922. At first the covers were merely reproductions, perhaps slightly reworked, of Studdy's pages for The Sketch. However, in 1926 the artist began supplying original pages for the American Weekly, and these, rather than giant panel cartoons as previously, were now often multi-panel affairs. While not comic strips in the sense of having panels and borders and such, they told stories using a series of artfully placed vignettes and text blocks.

The last A Dog's Life magazine cover appeared on August 14 1932, and according to the aforementioned website, had made about 115 cover appearances in that decade-long run. I'll probably regret butting heads with the experts on this, but I'm going to say that the estimate seems high to me -- there were many other series appearing on those American Weekly covers in the 1920s and I have trouble believing that roughly one out of every five covers featured Bonzo. So few appeared in the middle 1920s that I didn't even recognize that it was one long series until seeing the evidence presented on that website. In the (gulp) published version of my book you'll see A Dog's Life split into two discrete series, so get ready to take a red pen to your copy.

I said everything above only as preamble. Now we finally get to our actual official obscurity of the day, which is the U.S. comic strip version of Bonzo. Although the Studdy collectors are aware of the American Weekly appearances, they seem to be in the dark about this second series (at least it isn't mentioned anywhere on the web that I could find). Starting on May 13 1929, Hearst's King Features Syndicate began distribution of a daily comic strip version of Bonzo. The series was pretty spectacularly unsuccessful here in the U.S. -- very, very few newspapers signed on for it. I can only assume that King Features was having better luck selling the strip abroad because by rights a strip that appeared in so few places shouldn't have run as long as it did. Either that or the folks in charge at King looked at the success of the character in Britain and just assumed that eventually it would catch on here if they just gave it time.

Giving it time certainly didn't do the trick. Neither did adding a conventional Sunday version of the strip. The Sunday Bonzo is, if possible, even rarer than the daily version. It seems to have first been offered in 1932 (probably soon after the end of the American Weekly series), but the only examples I've seen are from 1933.

The daily Bonzo strip finally got the hook on May 6 1933, and presumably the Sunday accompanied it about that time.

Why didn't Bonzo catch on in the U.S. like it did in England? Maybe Studdy didn't put the same care into his U.S. offering that characterized his English material. Maybe American's don't have the affinity for bulldogs that the Brits do. Maybe Studdy wasn't comfortable with the daily strip format. The easy explanation with any imported strip is that the humor was 'too British' -- yet Studdy seemed to do a good job of playing to his American audience (the occasional bagpipe gag notwithstanding).

My guess? That dog was just too darn ugly.

Comments:
Also Bonzo was the star of an animated cartoon series in the silent era. He was the inspiration for the 60's British rock group the "Bonzo Dog Dooh Dah band".

Hello, Allan---It's amazing how poorly Bonzo fared. The character had a wonderful running srart. Studdy was a talented cartoonist, and produced a reliably funny and clever feature. Bonzo's popularity spilled over to all kinds of advertising and merchandise, the aforementioned cartoon series, toys, etc. He was, indeed, the "British Felix". However, in America, Bonzo made a feeble showing. Was it because we were not likely to embrace anything foreign? It's odd that all the examples shown I took from the British-hating Hearst's Chicago papers-the dailies from the Herald-Examiner, and the Sunday from the Saturday American. Without the "big time" of a U.S. audience behind him, Bonzo just drifted into obscurity, appearing in odd venues like post cards, generally becoming just "famous for being famous". ------Cole Johnson.

Hi,
Fascinating information! I collect antique postcards with themes. Over the years,I have collected many great "BONZO" cards and continue to look for them to add to my collection. They are very popular and always go quickly on the postcard sites that i deal with. I Love the little guy!
Right now, I am looking to buy a book by Mr. Studdy.
Thanks for the interesting facts about the author and the cute, little guy!