Obscurity of the Day: Howard the Duck 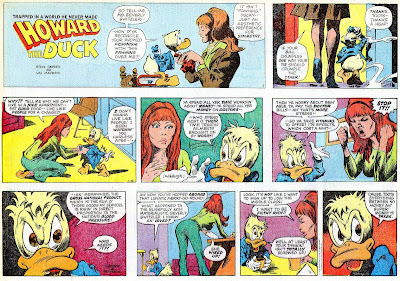 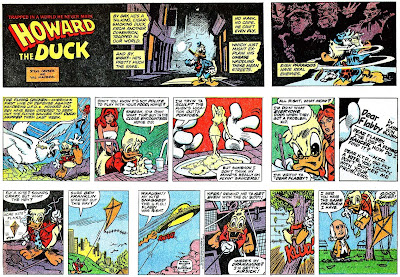 If you were a nerdy teenage comic book collector with intellectual aspirations in 1976 (as I was) you no doubt remember Howard the Duck. Howard, a cigar-chomping duck from another dimension "trapped in a world he never made" was THE hot comic book of 1976. The duck's creator, Steve Gerber, wrote intelligent stories that reveled in turning super-hero comic book conventions on their ears.

I didn't catch on to the duck's saga until about issue #4, and I still recall saving up my paper route money for months to buy copies of the first three issues at the local comic book store. Issue #1 was scarce due to low distribution and went for a king's ransom (about $20 as I recall). Heck, I was so enamored of Howard that I even went to the movie. I think I was the only one in the theatre...

Speaking of low distribution, the Howard the Duck newspaper strip certainly fits that description. Although Howard was a cause celebre among comic book fans, you can imagine what newspaper editors thought when the salesman from Register & Tribune Syndicate showed them this supremely odd strip. You can be sure that any editor who actually took the strip did so only because they had teenage boys at home who threatened to make his life hell otherwise.

The newspaper strip version began on June 6 1977 at the height of Howard-mania. At first Steve Gerber and Gene Colan, the creative team on the comic book, handled the strip as well. Colan, however, dropped out after just five months, and his job was taken over by Val Mayerik, who was also occasionally spelling Colan on the comic book.

In 1978 Steve Gerber abruptly left both the comic book and comic strip due to creative control issues with Marvel Comics. Gerber was last credited on the strip in April, and Marv Wolfman took over the writing duties. Shortly before, Mayerik bailed out and was replaced by Alan Kupperberg on art. The strip soldiered on until October of that year before being replaced by a strip about a different Marvel property, The Incredible Hulk.

Here are specific creator dates on the series, most of which come from John Wells with a few edits by me. Undoubtedly, as with all Marvel newspaper strips, there's more to the creative story than is told by the official credits...

Comments:
On a somewhat related note, who exactly is doing the Spider-Man comic strip these days? The credits say it's the Lieber brothers, but that doesn't seem too likely. If it really is Stan and Larry, then my hat's off to both of them!

Allan, I will be going away for a short holiday soon. Can you tell me (privately, if you want) how to time posts to appear daily in advance on Blogger?

Hi Ger --
When you are writing your post, look down at the bottom of that window. You'll see a thing called "Post Options". Click on that text and some extra prompts will pop onto the screen. You'll see where you can enter a date and time for the posting to appear on the blog.

Hi Dave --
Stan and Larry said they were still doing it in separate Alter Ego interviews. Granted those are both probably a few years old by now, and who knows if they're telling the truth, but I haven't heard any contrary rumors. Anyone have the inside scoop?

Lee still scripted it, Leiber still draws the dailies, while Alex Saviuk and Joe Sinnott does the Sunday strips.

Re: the current The Amazing Spider-Man comic strip.
My understanding is that Stan Lee still writes it, with an assist from Roy Thomas for the past ten years.
Larry Leiber pencils the dailies with Alex Saviuk inking the dailies. Alex Saviuk pencils the Sundays and Joe Sinnott inks the Sundays. (Every couple of years lately Joe Sinnott, for one reason or another, has taken a break and Jim Amash has filled in as the Sunday inker).

If anyone remembers the work Larry Lieber was doing 45 years ago, the daily Spider-Man strips sure look like his stuff, just as Joe Giella's Mary Worth bears a passing resemblance to what Joe was doing for DC Comics back in the 1960's.

Allan,
To me, these credits seem a bit more accurate...

A public thanks to Joe Brusky, who helped Howard fans remember this great strip existed.

Thanks Mark, I've updated the story listings to reflect your additional research. Thanks!

There was a collection of the strip or at least the first weeks by Gerber/Colan, published back in the 1970s by a group of fans in New Jersey (as I recall).