Obscurity of the Day: That Family Next Door 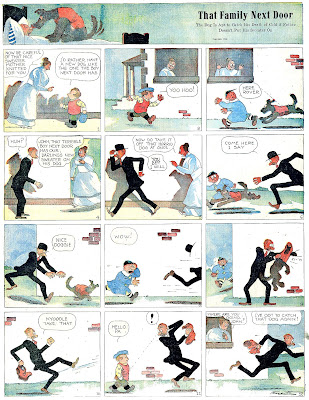 Here's a strip that's got me puzzled. That Family Next Door was by Jean Knott, and ran in 1917-18. I have the grand sum of three examples of this rather generic strip in my collection, plus the one above which is a scan from Steven Stwalley (thanks Steven!). The mystery regards the syndicate. Jean Knott was in the Hearst stable throughout his comic-stripping career, so one would presume this to be a Hearst strip. The title header on the Sundays looks rather Hearst-y, too.

There are a few problems with positively identifying it as a Hearst strip, though. First is that it didn't run in New York, so we have no positive ID based on the home paper. Second is that every example I've seen (total of four, you'll recall) has the same sort of copyright line as you see above, with the company unidentified. These two factors alone don't really amount to much, though. By 1917-18 Hearst produced more material than he had room to run in his New York papers, so the fact that it only ran outside of New York is immaterial, if not a point in favor of it being a Hearst production.

The real problem regards the three examples I have in my collection. Sadly, all three are single sheets with no identification of the newspaper they came from. However, all three examples have Pulitzer strips running on the reverses, and Pulitzer footers on both sides (by footers I mean a rectangle running on the bottom of the sheet with a group of Pulitzer's comic strip characters cavorting together). Now that is certainly no guarantee that That Family Next Door is a Pulitzer strip, but three sheets that all have Pulitzer content surrounding our mystery strip was enough to tip the scales in my mind enough that my Guide listing for the feature credits Pulitzer.

So what do you think? Do you have any additional evidence that might help to solve this mystery?

Comments:
Isn't the type font in the "Copyright 1918" the same in the Hearst corp's "newspaper feature Syndicate'? The letters in the title (if not the logo)look much like those used in other b-grade Hearst offerings like Asthma Simpson.