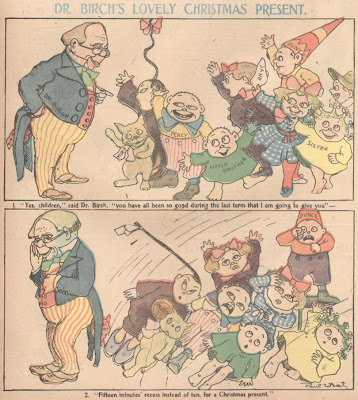 Paul West had what I can only describe as a really repellent cartooning style, but for some reason the New York World thought a lot of him. Although West didn't draw that many comic strip series in his career, his cartoons often 'graced' the masthead of the World's comic section in the late 90s and early 00s.

The Doctor Birch's School series ran from September 9 to December 23 1900.

Paul West drops off my radar in 1903, then shows back up in the teens at the New York Herald, where he penned the poetry for a number of the Sunday magazine cover series.

Tip of the hat to Cole Johnson for the scan. Thanks Cole!

Paul West later joined forces with legendary illustrator W.W. Denslow (he illustrated "The Wonderful Wizard of Oz" in 1900 among other books and also created the comic "Billy Bounce")and wrote the book fversion of Billy Bounce which Denslow illustrated. The book is available for download on lulu.com website.

Oh, and I agree with you--West's drawing style is repellant.

Hi Allan -- Long time no see, etc. About Paul West: before passing to the NY Herald, he signed the script of "Billy Possum" for the Chicago Tribune in 1909.
He died (by accident? By suicide) in Paris around September 22 1918; on September 29, after a week from his mystery disappearance, his body was found in the Seine River, "fully Dressed in His Red Cross Uniform". He was a Captain and the Director of the Editorial and Historical Bureau of the American Red Cross in Paris.
He had been severely gassed in Soissons, and was about to return to the US to recover.
He was possibly one of the first comics writers who signed his work.
Best
Alfredo Castelli

Hi Alfredo --
Thanks for the interesting info about Paul West. Billy Possum, which I see in your book, is something I seem to have missed when I indexed the ChiTrib. The sample you show is pretty text-heavy, but no more so than some of his Herald work which I did index. Maybe the microfilm I worked with was missing those pages (like it was missing all of Wee Willie Winkie). What (English) months do MAG and LUG stand for?

Thanks Alfredo -
As Steve Martin once said, "It's like those foreigners have a different word for EVERYTHING!".

West would do unusually topical subjects and caricitures of figures in the news with the Roly-Polys in the masthead cartoons of the Funny Side in those days.