Obscurity of the Day: Hit or Miss 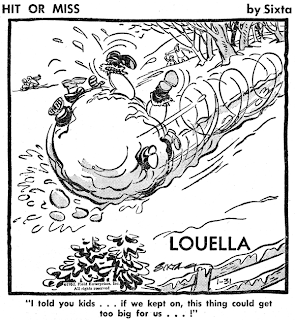 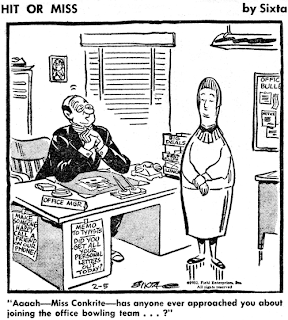 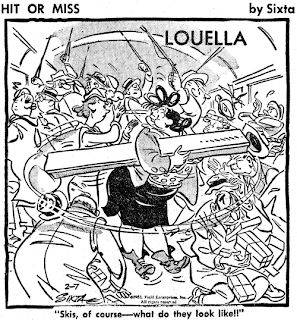 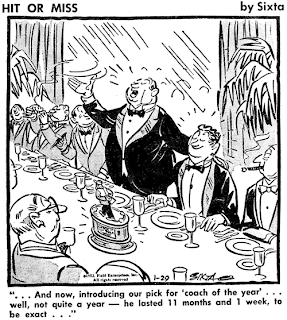 Well, you go away for awhile and Blogger goes and changes everything on you. Hopefully this post will look 'normal', but the interface for creating it has changed quite a bit, so I'm a little disoriented here.

Anyway, here we have Hit or Miss by George Sixta. It was a sports humor panel done for Field Enterprises. Field, as I almost certainly have said before, was a syndicate initially created by Marshall Field to sell features from his Chicago Sun newspaper. When Field started the Sun he found that Chicago was pretty much all sewed up with exclusive contracts on the better features. He resolved to purchase his own features and market them. Ironically, the Field Enterprises syndicate ended up being a better moneymaker than the Sun itself. It has been said that the flagship feature, Steve Canyon, was responsible for keeping the Sun afloat for many years.

Sixta's Hit or Miss was the sort of feature that just sort of makes you shrug. It was workmanlike but never memorable. Sixta tried to inject a little more personality into the feature by adding the recurring character Louella, a big-boned, rather dim sports enthusiast. Presumably a Rubenesque gal who liked sports was supposed to be ludicrous ... guess George never saw any roller derby. Louella appeared twice a week, with special billing in the panel, through much of the run.

Hit or Miss was Sixta's second Field Enterprises effort, starting on November 1 1948. In 1953 he sold a third feature to Field, Rivets, and handed off the baton on this one to someone who signed himself Ryan. Since the feature wasn't exactly doing major league business anyway, it faded pretty quickly and hit the syndication showers on January 9 1954.

PS -- can a football fan explain the final example above for me? I assume there's some significance to the 11 months and a week, but I'm missing it.

Comments:
I thought it was just the gag you see there: that he's not been there for a full year technically

Hello Allan----Was his name pronounced "SiCKS-TA" or "SEES-TA" ? I remember RIVETS running in the PHILLADELPHIA INQUIRER for about thirty years.-----Cole Johnson.

I think joecab is right. Though named Coach of the Year he didn't even serve a full year. A laugh riot, that; I'm snapping my galluses already.

Hi Cole --
I just assumed SICKS-TA for no good reason at all. Could have asked a relative of his who contacted me many moons ago, but it never even occurred to me.

... and if you guys are right about that last panel, well, geez, that's a pretty sad excuse for a gag.

Hi, Allan -
In 1983 the NCS held their Rueben Awards Banquet outside of New York City for the first time. It was at the Beverly Hills Hotel in Los Angeles, CA, and I attended. With everyone wearing tuxedos who I'd never even seen in a suit and tie of any sort, the bar looked like it had been invaded by penguins.

Milling around the banquet room meeting so many great names in the cartooning world whose work I'd admired all my life, I was shocked to find myself chatting with an extremely gentlemanly old man who introduced himself as George Sixta, and he pronounced it Sick-sta. I'd always wondered if it should have been pronounced Sees-ta and that maybe he had just given up and pronounced it the way everyone said it.

I'm thinking the joke, based on the use of the word "lasted," is that the coach of the year was fired before he even served a full year term.
-- Dave Blanchard