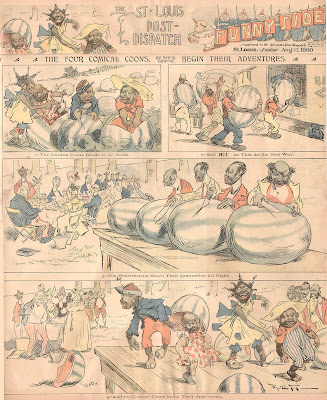 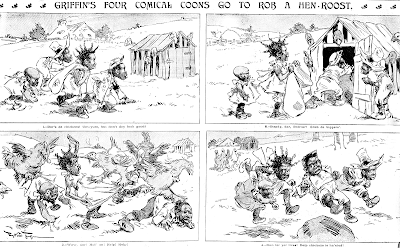 Turn of the century comic section editors never met a racist stereotype they didn't like and this feature, penned by Syd B. Griffin, touches some especially sensitive bases. The four kids that give the feature its sometime name, Four Comical Coons, were really just Katzies turned black, but the props and situations leaned heavily toward archetypical racist symbols -- a laundry-toting mammy, stealing chickens, and of course the obligatory watermelons.

The series appeared in the New York World comics section from August 12 to December 9 1900, and when the standard title wasn't used the number of kids was sometimes cut back to just two or three.

Symbols are a form of shorthand, but they stop short of meaning one thing. Where does a 'racist symbol' start and stop being racist? I do laundry and eat watermelons, if I drew a black person doing these things, would it then be viewed as racist intent from everyone's perspective? I'm wondering because I just read an interview with Picasso where he says that when he drew a hammer and a sickle together, he didn't do it thinking of communism, but of the objects themselves. Separately, when Picasso drew a bull, he agreed it symbolized brutality and darkness, but refused to agree with the interviewer that it equaled fascism.

Now, these cartoons are ultimately cowardly, and racist as hell, presuming a philosophy and message that go beyond cartooning, now that we view all art as being an explicitly drawn message. At the time, they might've believed or laughed off those images in a more thoughtless way, but they did their share of harm. Now of course, the comics themselves say way more about those attitudes than any newspaper article.

Did the artist want to draw cartoon blacks, feeling impelled to script them toward these stock characters, or vice-versa?

If you believed we were worse off for having this record, you could easily not have posted it, so I suspect there's your message is that artists must be politically and socially conscious? When we ask the type of visual artists who are 'only an eye' to broaden their range, will they still have a drawing ability? Sorry for sounding so goddamn ponderous, but it's almost like there's another issue at work here besides racism, the 'tunnel vision' of many artists.

I think somehow today, we read words and images as working more 'hand-in-hand' more often than they did then. I suspect the pictures would have meant everything to artist and the words would've meant next to nothing. Kind of the opposite of how people see the stars next to a film review and misread the writing.

I'm not excusing the artist's intent or the harmful effect on black people, I assume he found this funny, but like Robert Crumb, I doubt if he could pinpoint where his intent lied. Authors may write when they make a judgment, but I don't see artists working in the same way. They tend to draw when they find something, even if it isn't 'the truth' and may have a lot in common with prevailing attitudes.

Hi sharpyoungbull --
Please keep in mind that people come to this blog in many different ways, oftentimes for reasons having nothing to do with an interest in comic strip history. I feel it is important to point out on any blog post that deals in racist imagery that I don't condone or celebrate the content but present the material because it is historically interesting and arguably important.

If someone arrived at this post because they were, say, Googling for racist websites, I want it to be clear that they haven't found a place where these outmoded, unfunny and frankly repugnant views are shared by the proprietor. Ok?

As to the cartoonist's actual intent, my vote is laziness, as it usually is with stereotypical comics. Notice that there is no real attempt at being funny in these cartoons -- Griffin merely trots out the tired old chicken-snatching and other material as if it is all just so inherently hilarious that there no need for any injection of any original humor. I consider it rather pathetic frankly. Same goes for Zim, who was notorious for this kind of garbage. E.W. Kemble, on the other hand, dealt in what we call racist imagery, but I've always felt that a case could be made that his cartoons were sometimes (not always) a cut above this sort of trash.

Hello, Allan, and everyone -----The Stripper's guide is the place for an honest warts-and-all REAL history of the American comic strip, not a selection. Allan Holtz is just who you want as a historian, as he doesn't shackle himself to a "speech code" to filter the controversial aspects away. Racist stuff like the COMIC COONS were definitely part of the story, indeed part of the story of the world in general of it's time. It's important to know that Mr. Griffin and others in 1900 did not have hate in their hearts, just an easy, even lazy, as Allan says, set of quickly identified stereotypes and the shtick expected of them. Stereotypes of many others were also to be found, of course. (Italians, Germans, Orientals, etc.) It's a very basic form of humor -- everyone got made fun of. It was just breathing the American air. One thing that I learned from Griffin's comic was to always check the melons carefully when I'm at the A & P!------Cole Johnson.