Obscurity of the Day: Cuddles 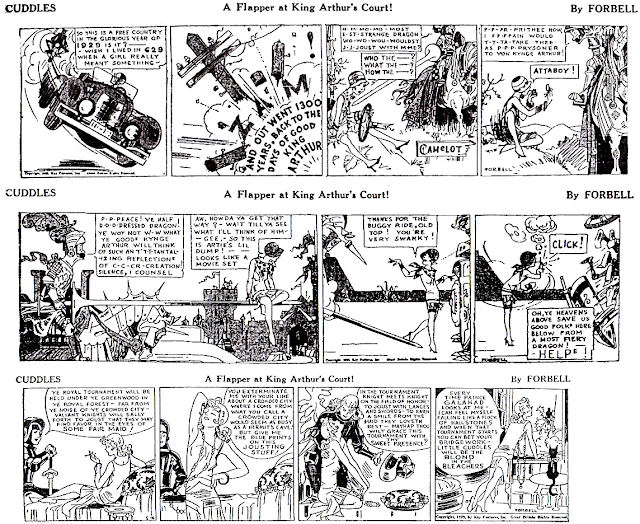 Here's an exciting group of scans that I was alerted to by The Arthur of the Comics Project. He saw and saved them from a post by John Adcock on the Platinum Age listserv back in 2004. The strip, Cuddles, was drawn by the wonderful Charles Forbell in 1929 for Kay Features.

Kay Features was a small start-up syndicate run by Moses Koenigsberg. Koenigsberg was for many years a big wheel in the Hearst organization, and their King Features syndication arm was one of his babies. In 1928, Koenigsberg, who was an egoist of the first order, was offered a medal by the government of France. Hearst was appalled that Koenigsberg, a newspaperman, would accept the laureates of a foreign government and told him that he could have the medal or his Hearst job, but not both. Moses, vain to a fault, opted for the medal.

In 1929 Koenigsberg was without a job but not without the desire to continue in the newspaper game. He hatched a plan to run his own chain of newspapers, and to hear him tell it, came close to succeeding. In King News, his self-serving autobiography, he claims that the chain would have included over 100 newspapers (or 50 or 35 depending on the page cited), the flagship of which was to be the Denver Post. The sharpies at the Post, though, were playing a shell game with him and though he doesn't admit it they seem to have ruined him financially.

Kay Features, of which mention is conspicuously absent in King News, was probably set up as some sort of syndicate arm for this proposed newspaper chain. Koenigsberg took great delight in building new ventures like this, but since he was busy with much bigger fish to fry, the syndicate seems to have received little benefit of his golden touch. Their features were advertised in Editor & Publisher from 1930-33, and announced in 1929, but they are very rarely found running anywhere. Most remain stubbornly on my E&P Mystery Strip lists. Apparently in November 1929 the Kay Features line-up was having so much trouble interesting clients that Koenigsberg turned over sales and distribution of the features to Bell Syndicate. Naturally Bell, having Great Depression troubles of their own, did very little to try and sell anything on the Kay roster. Why sell a feature on which profit-sharing was due when you can sell from your own substantial list?

Cuddles began on March 4 1929 (at least in the San Francisco Chronicle) and the last example above, dated May 4, is the latest I've seen of the series. Yet it was advertised until 1933 along with much of the rest of Kay's rarely seen output. It's a shame, too, since Charles Forbell was one fine cartoonist (I just love panel 1 of the second strip above, for instance) and the subject matter, though obviously ripped off from Twain's A Connecticut Yankee in King Arthur's Court, has great possibilities. To be fair, though, flapper comics by 1929 were already looking pretty dated since the era of the flapper was on the wane. I can imagine editors seeing the new strip and snorting, "Waddya trying to sell me here? Some strip that was drawn up in 1925?"

If anyone has a lead on any Kay Features strip, especially any appearing later than 1929, I'm anxious to hear from you.

Comments:
This was another title that Western Newspaper Union was reprinting as late as March 1934, still with the 1929 kay features copyright line.

Haven't seen Cuddles from WNU. Do you recall the paper(s) where you saw this?

The Fredonia Censor is the one I have it in.(New York)

I thought you had to be pulling my leg, but sure enough there really was a Fredonia Censor. What a title!

If you happen to have the material at hand, I wonder if Cuddles stuck with the King Arthur gimmick or did she stray off to other venues later?

Grizedo --
BTW, I want to add a note about the WNU appearance of Cuddles to the Guide. Can I get your full name to credit you as source? You can email privately if you prefer (stripper@rtsco.com).

Possibly they are not w.n.u., it is a fair guess though. The other strips the censor had were the old, old mcclure series Just Humans and The Clancy Kids. They also had Micky and his Gang, Drugstore Cowboys and Jungletown Fables. Maybe I'm guessing wrong that Micky is a continuation of Micky the Printer's Devil, and the three titles are really Bonnet Brown syndicate. Then the reissued Cuddles could be handled by either B-B or McClure.

Hi Grizedo --
At least two of the three strips you list were done by Paramount Newspaper Feature Service aka PNF Service circa 1927. Very rarely seen, but I have found them running in reprints as late as the mid-30s. I would guess that both these and the McClure series were being resold by one of those really cheapo outfits like US Feature Service.

Surprising that only the one Kay strip was included given the circumstances.

I'm glad to see you've been able to put the scan to good use. Thanks for the information on the series too.

My brother found this one running in THE BROOKLYN CITIZEN in 1931.-----Cole Johnson.

Just noticed that the original art for the third strip pictured appeared in a CBC broadcast from 1957. Check it out at 1:55.
http://www.cbc.ca/archives/entry/the-golden-age-of-comic-strips