Obscurity of the Day: Dippy 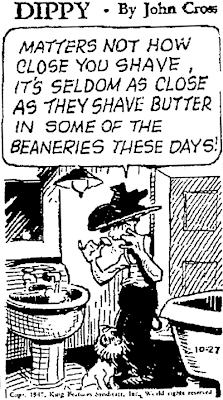 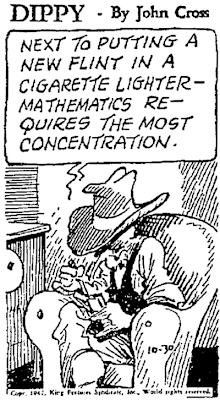 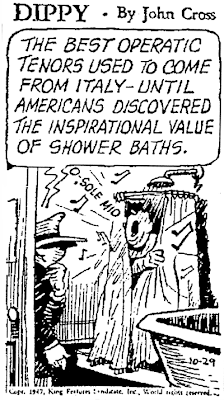 John Cross was primarily an editorial cartoonist, but he did try his hand at humor features every once in a while. Based on my meager files, Cross was active as a cartoonist at least from the 20s-40s, and jumped around a bit. I've got samples of his cartoons from the Nashville Tennessean, Nashville Banner and the Knoxville Journal.

Cross did a few local humor features, but this little one-column panel cartoon, Dippy, was his only syndicated effort. The King Features distributed feature was another in a long line of attempts to duplicate the success of Frank Hubbard's Abe Martin cartoons. This one certainly didn't take off at all despite some pretty good smirk-inducing homilies in the samples I've seen. The dates I have for the daily feature are October 13 1947 to June 5 1948. I've not had an opportunity to check what I presume to be Cross' home paper at the time, the Tennessean, but they would probably offer the best chance at seeing the complete run.

John Russell Cross was born in Davidson County, Tennessee in 1901, according to his World War II Army Enlistment Record. He was the first of three children as recorded in the 1910 U.S. Federal Census. Cross's father, John, died some time after his birth. In 1909 his mother, Adele, married Dr. Roland Macon; the family resided in Clarksville, Tennessee.

In the 1920 census, Cross and his family remained in Clarksville, living at 314 North Second Street. Curiously, there was another "John Cross" in Clarksville, who resided at 320 Main Street, about three blocks from John Russell Cross. "John Cross" was boarding with Dr. John and Augustine Sladyen, who were the parents of Adele. Apparently, Cross was actually living with his maternal grandparents and was counted twice in the census.

Cross enrolled at the Chicago Art Institute in the fall of 1921. Artist Everett Gee Jackson wrote about his encounter with Cross in the book, "Goat Tails and Doodlebugs: A Journey Toward Art."

From pages 170 and 171
In the registrar's office of the Art Institute of Chicago, I found many art
students not only paying their fees but also being assigned to rooms in
nearby locations in the city. One young man in the line introduced
himself to me.

"I am John Cross," he said, "I am from Clarksville, Tennessee, and I am
here to learn to be a newspaper cartoonist."

"I told him my name and that I was from Texas A&M. I said that I was
hoping to learn how to draw and paint.

"You had better go into cartooning," he advised me. "If you become a
painter, you will starve to death."

Right then we decided to room together. The room assigned to us was
on North State Street in an apartment owned by a little black-eyed Irish
lady. When she showed us our room, we found that it was on the second
floor of a building, right up above the street and above the streetcar
track. Every few minutes a streetcar would come grinding by, making so
much noise I felt sure we would never be able to go to sleep in that
room. But we had already paid a month's rent in advance, so we decided
to try to stay there at least one month.

That first night the noise was unbearable, but to our surprise, we did
not hear any noise the second night, nor thereafter. Apparently one can
get accustomed to noise and not notice it at all. However, we did
observe later that whenever a friend dropped by to see us, he would
invariably say, "How can you stand to live in this noisy place?"

Johnny Cross and I were in several of the same classes at school,
one of which was life drawing….

From page 175
Johnny was wondering what I had in the box. When I opened it, out
came the lively monkey. The first thing he did was scamper up to the
ceiling of our room, going up the white curtain that hung on each side
of our window. I had not even noticed those curtains before. The
monkey must have been frightened, for he stayed up there, looking
down at us and chattering a long time. I started calling him "Coco," and
I kept begging him to come down. Finally he must have responded to
the kindness in my voice, for he descended and jumped upon my
shoulder. We became friends. He also became friendly with Johnny,
who was as delighted with our new roommate as I was.

From page 187
One night we went to a party in Evanston at the home of a girl named
Pauline Graf. That night, everyone got so interested in a game we were
playing that the party did not break up until quite late. Since Johnny
and I were now living on the south side of Chicago, we would have a
long trip home. The main reason we had moved to the south side from
our State Street address was that Pauline's father had insisted upon it.
He had told us we were in great danger where we were living. He had
said that we were surrounded by members of the Mafia whose boss
was a notorious individual by the name of Al Capone. Partly because
of this information Johnny and I had moved...

Cross married in 1926; his wife's name was Helen. The 1930 Census recorded his occupation as cartoonist at the "Tennessean." The couple lived with an aunt, Jennie Lee Waldkirch, and two roomers in Nashville.

In 1939 the book, "Tennessee: A Guide to the State", was published. It was produced by Federal Writers' Project of the Work Projects Administration. Cartoonists were highlighted on page 171.

Outstanding among Tennessee cartoonists are Carey Orr and Joe
Parrish, now of the Chicago Tribune, Tom Little and John Cross, of
the Nashville Tennessean, and Jack Knox, of the Memphis
Commercial-Appeal.

Cross enlisted in the army on June 20, 1942 at Fort Oglethorpe, Georgia. His marital status was "separated, without dependents." He stood five feet, ten inches and weighed 188 pounds.

When and where he died is not yet known. Perhaps there is an obituary in the Tennessean newspaper.