Obscurity of the Day: In Birdsboro 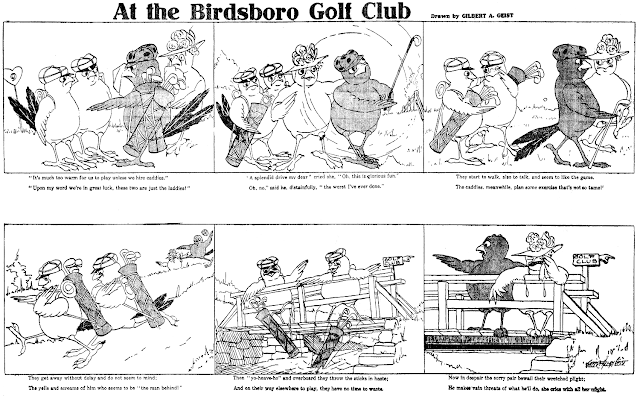 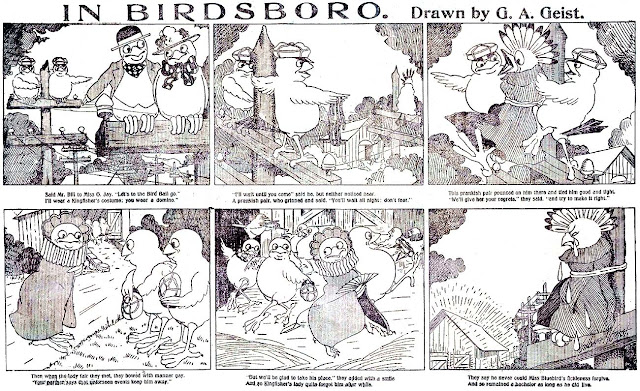 Apparently no matter how small and pathetic the niche someone carves out for themselves, there's always someone willing to try to duplicate even the barest modicum of success. With In Birdsboro, a fellow named Gilbert A.Geist chose to ride the dubiously worthy coat-tails of Horace 'Harry' Martin. Martin created the Weatherbird for the St. Louis Post-Dispatch in 1901. Harry apparently only had one good idea in his head, but he was determined to beat it to death. He moved to New York City and hawked his bird strips for years to a city full of generally indifferent editors and newspaper readers. We've met him before here at Stripper's Guide with posts about a few of his bird strips, Inbad the Tailor and It Happened in Birdland.

Geist, who has no other credits of which I'm aware, apparently never heard the old saw that if you're going to steal then only steal from the best. He copied Harry's bird characters pretty much verbatim for this series, which ran in the Philadelphia Press Sunday section from September 30 to December 23 1906 (one final left-over Sunday strip was run on Thursday, January 31 1907 to plug a hole).

Comments:
Gilbert Allen Geist was the third child of George and Ella as recorded in the 1880 U.S. Federal Census; the Geists resided in Doylestown, Pennsylvania. He was born on January 29, 1879 according to his World War I draft card. After his work at various Philadelphia newspapers he moved to College Station, Texas. The Fort Worth Star-Telegram published an article on August 29, 1909, page 17, on college faculty changes.

Gilbert Allen Geist, whose signature upon much of the art
work in the columns of the Public Ledger of Philadelphia is
familiar to the readers of that paper, is to be of the teaching
force of the A. & M. college of Texas. Prof. F. E. Glesecke,
who is at the head of the department of architectural
engineering and drawing, has secured Mr. Geist as a teacher
of drawing to succeed one of the instructors who closed his
engagement with the college in June. Mr. Geist took a two
years course in drawing at the Pennsylvania Museum and
School of Industrial Art, in Philadelphia, and spent almost
a year at the Art Students' League in New York. Since
finishing his school work he has been connected with the
art staff of the Philadelphia North American, the Philadelphia
Press and the Public Ledger and has conducted a class in
drawing at the Y. M. C. A. in Philadelphia.

Geist married Emily Kurtz Dulaney on June 24, 1920 in Seaford, Delaware. According to their marriage certificate he was living in Philadelphia and she in Seaford. Emily was 13 years his junior.

In the 1930 Census the couple was living in Bryan, Texas. He was still teaching at A. & M. College. Geist died on September 12, 1937. He was buried at Fairview Cemetery in Macungie, Pennsylvania according to information at Roots Web.

Bravo again to Alex!These biographical sketches on the more obscure strip artists are a most welcome aspect of the Stripper's Guide blog. IN BIRDSBORO is a kind of demented feature. In every episode, the two nameless punk birds commit petty acts of cruelty, sometimes with little apparent point. They always get away with it, and in a cheerful rhyme to boot!----Cole Johnson.