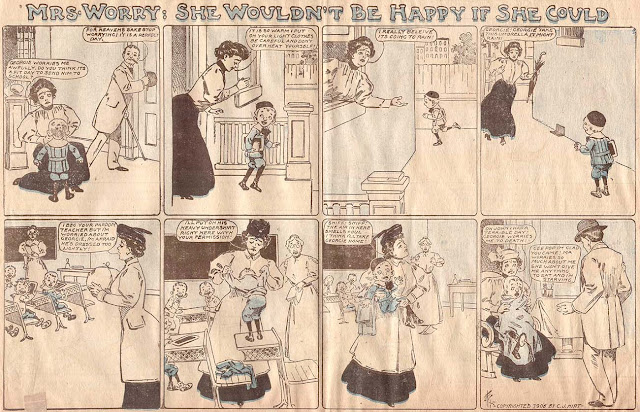 Mrs. Worry is one of those strips that gets old before you've finished reading even a single strip. Yes, Mrs. Worry worries. Ho hum.

John A Lemon penned this forgettable feature in his typical fussy style for the C.J. Hirt-copyrighted version of the McClure Sunday section from March 11 to May 6 1906. I doubt that any readers worried overmuch when Mrs. Worry failed to appear after that.

Comments:
In 1912 there was another Mrs. Worry, a dailie strip by C.A. Voight.

Joseph A. Lemon was born in Kansas in May 1870 according to the 1900 U.S. Federal Census. He married Caroline in 1897. They lived at 312 West 18th Street in Manhattan, New York City. His occupation was "artist". Lemon has not been found in other census years.

Lemon was listed in a number of New York City directories:

Lemon was a contributor to the "Blue Pencil Magazine", which was published by the Blue Pencil Club. A description printed in the first issue, February 1900:

Intrenced in the second floor at No. 9 Spruce street, New York
City, this unique organization occupies quarters that, to say
the least, are bizarre and out of the ordinary.

It is the home of the best known newspaper men and artists,
whose work is known all over these United States, and who
are all possessed of the true Bohemian instincts that are only
to be found on the island of Manhattan.

In the May 1900 issue, Lemon contributed a portrait drawing; on page 19 were brief descriptions of the contributors. Below are some of the cartoonists:

Blue Pencil Magazine, Volume 1 is available as a PDF download at Google Books.

With a broad brimmed, black Stetson hat, big Joseph Lemon
looks the artist, his flowing black tie adding to the impression.
This makeup does not prevent his wielding a prolific pen
which costs the McClure syndicate newest freak element in
New York humor, and furnishes the aviary department in the
live stock humor of the "American."

Lemon contributed illustrations to several books including "Toothsome Tales Told in Slang" (1901), "The Man with the Grip" (1906), and "Colonel Crook Stories" (1909; available as a PDF download at Google Books).

Art Young mentions Lemon in his book, "Art Young: His Life and Times", on page 207.

On the walls among the array of weapons were framed drawings
which had illuminated Sunday World feature stories that Will
had written, and originals done by the artists on the World staff;
also drawings for the "funnies" of that era, by Dick Outcault,
George Luks, Anderson, Bryans (whose silhouette pictures were
then popular), Tony Anthony, Gus and Rudy Dirks, Joe Lemon,
Walt McDougall; and illustrators such as Will Crawford (he
made comics as well, but always seemed too dignified and
artistic to be classed as such), "Hod" Taylor, Al Levering, and
others.

Lemon remarried after 1912; what happened to his first wife is not known. The periodical "Metal Record and Electroplater", December 1918, published the following notice:

Joseph Brown Beach, 67 years old, head of the sales force of
the International Silver Company, with which he had been
associated for forty-two years, died yesterday at his home,
302 West Thirtieth Street. He was born in Connecticut, and
lived in this city [New York] twenty years. His daughter is
the wife of Joe Lemon, the artist.

Beach's daughter Daisy asked for a separation from her husband, William F. Palmer, as reported in Oakland Tribune, November 13, 1912. Their divorce followed. How and when Lemon met Daisy is not known.

When and where Lemon died is not known.

Lambiek Comiclopedia mentions Lemon's strips "The Adventures of Dennis O'Shaugnessy", "Willy Cute", "Hop Lee", "How would you like to be John?", and "Humpty Dumpty". Two "Hop Lee" pages (Saint Paul Globe, December 6, 1903 and October 30, 1904) are available at Chronicling America, chroniclingamerica.loc.gov.

It has been a whole week, and no new entries. Could anything bad have happened to Alan? This is really bothering me.

I am getting very worried too.