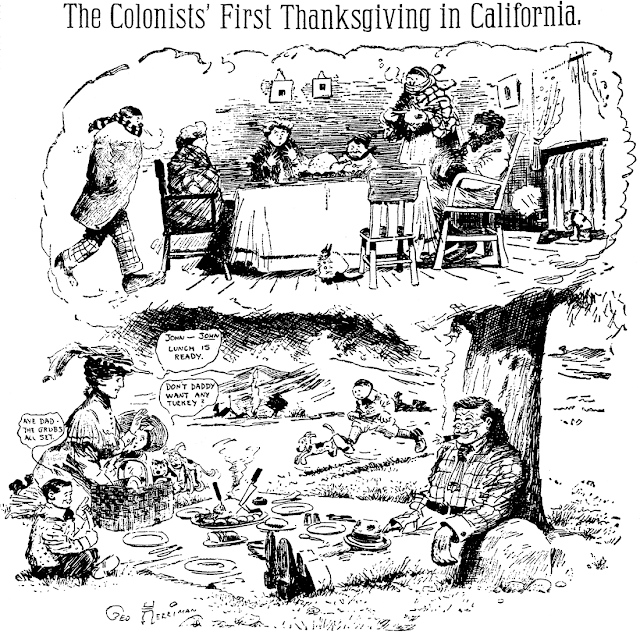 Thursday, November 28 1907 -- Herriman contributes a Thanksgiving Day cartoon remembering the cold day on which the 'first Thanksgiving' was celebrated in California in 1850. 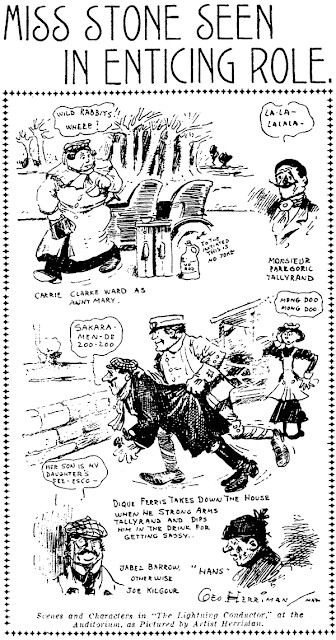 Thursday, November 28 1907 -- More local theatre in Los Angeles, this time a production of The Lightning Conductor, a most modern play concerning the "strange adventures of a motor-car" starring Florence Stone and Dick Ferris.

Comments:
In the Thanksgiving cartoon, wouldn't it seem more likely that the "colonists" refered to are the nice warm family in the foreground, thinking back to past Thanksgivings, I guess back east, in a freezing apartment house? 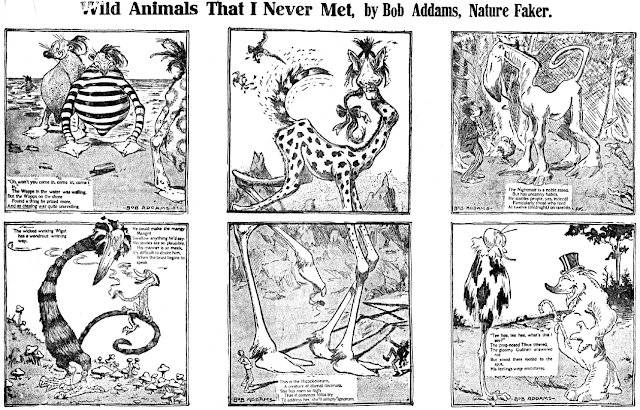 Bob Addams, whose stock in trade was always animals in his newspaper series, produced the fantastical  Wild Animals You've Never Met (occasionally titled "..I've Never Met" as above) for the Philadelphia Press from August 18 1907 to February 16 1908. In this series Addams exhibits an oddly prescient Seussian style. Could the 4 year old Ted Geisel have had access to the Press or one of its syndicate clients over in Springfield Massachusetts? I dunno, but li'l Ted would have been at an ideal age to have something like this get stuck in his brain, don't you think?

Thanks to Cole Johnson for the sample!

Comments:
What a fantastic find! Seems to be from the same school as J.P. Benson’s The Woozlebeasts and Gustave Verbeek’s Terrors of the Tiny Tads. Always interesting to see early Wolverton-esque proto-uglies. These are beautifully drawn and very funny.

I would guess the title is a reference to the book Wild Animals I Have Known by Ernest Thompson Seton.

Thanks, as always, for posting the good stuff, Allan!

Lovely. Why I keep this feed at the top of my iGoogle page. I like the playing around with the second column panels, and the variety of limerick-like rhyme schemes.

Obscurity of the Day: The House of Mirth 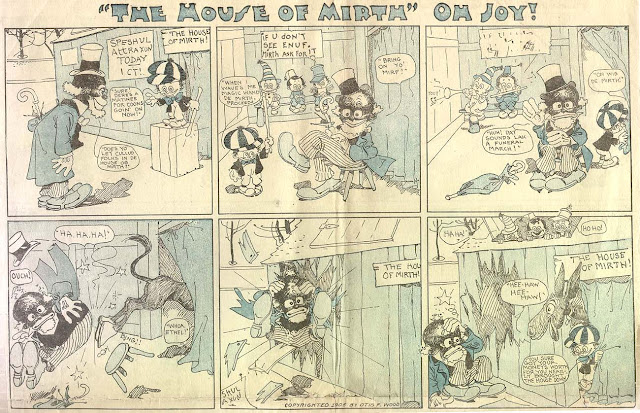 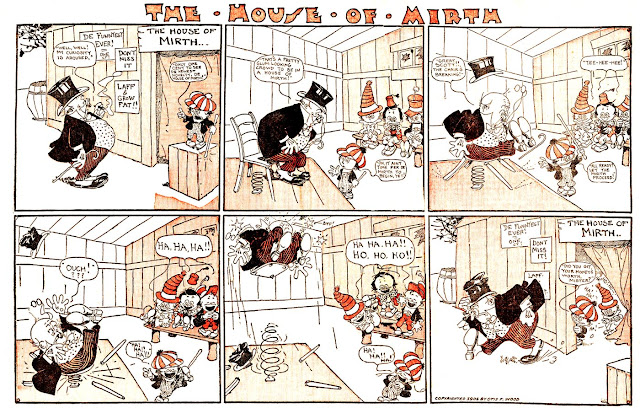 William F. Marriner had a great idea with The House of Mirth, a strip about kids running a little sideshow-type establishment. There's a great twist to it, which I'll let the samples above reveal. Unfortunately once the gag is played a few times the surprise is gone. Marriner recognized that and didn't stay with the strip for long, a wise decision that many other cartoonists wouldn't have made.

The House of Mirth ran in McClure's Otis F. Wood-copyrighted Sunday section from March 4 to June 25 1906, and returned for a single later appearance in the section on August 4 1907 (probably a left-over). In 1916 the strip ran in b&w reprints from the International Cartoon Company, sold to a few podunk papers.

Obscurity of the Day: The Alley Kids 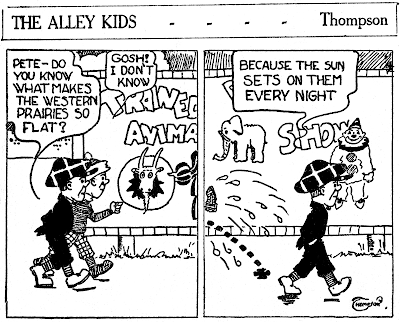 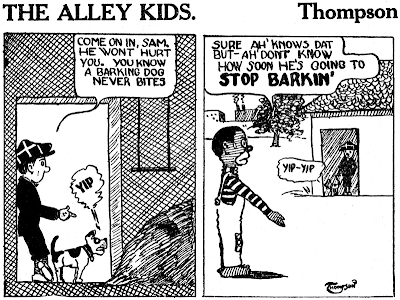 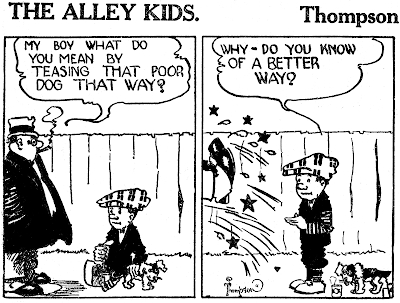 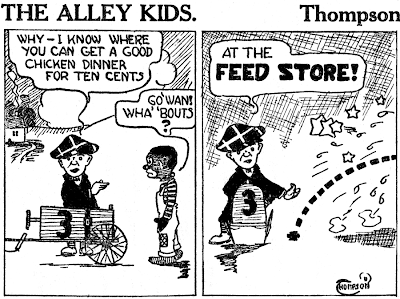 Here's a strip that was done for the  Bellingham (Washington) American Reveille by a fellow named Benton F. Thompson. I suspect Thompson was a kid cartoonist based on the rather rough drawings. Based on the files of Cole Johnson, The Alley Kids ran in the Reveille, probably on a weekly basis, during the period March to May 1922. It may well have run much longer, but that's the date range of the samples he has.

Comments:
Benton F. Thompson was born in Nebraska on April 20, 1906, according to the California Death Index. In the 1920 U.S. Federal Census he grew up in Lone Tree, Nebraska, a farm town. When he moved to Washington state is not known; apparently he resided in Bellingham where his comic strip, "The Alley Kids," was published by the Bellingham American Reveille in 1922. The Bellingham Record newspaper published two articles, on June 10 and 19, 1922, that mentioned "Benton Thompson", who was a 16-year-old radio hobbyist.

Thompson moved to Seattle and produced cartoons for the Seattle Times as early as October 1929; he signed his cartoons, Ben Thompson. In the 1930 census his name was recorded as "Benton F. Thompson"; his occupation was an artist in the newspaper industry. For the Times he and co-writer Robert Edgren did a daily cartoon called, "Listen to This One" from June 1930 to March 1932.

Thompson moved on to comic books in New York. The Comiclopedia (lambiek.net/artists/t/thompson_ben.htm) has samples of his comic book work as well as a brief biography which is based on information at Who's Who of American Comic Books, 1928-1999 (www.bailsprojects.com/(S(qtydph45eleqmdihifhwmgu3))/bio.aspx?Name=THOMPSON%2c+BEN). The Grand Comics Database has a detailed list of Thompson's work at www.comics.org/credit/name/ben%20thompson/sort/alpha.

Thompson was married when he enlisted in the Army on May 16, 1942. After the war he returned to comics. Around 1949 he published a 16-page pamphlet, "The Reaper", about Joseph Stalin (comicsdc.blogspot.com/2007/04/reaper-stalin-cartoons-by-benton-f.html). At the bottom of the last page of art is a line that reads: Distributed by Benton F. Thompson Co.

There was a Benton F. Thompson who lived in Connecticut; he and his wife divorced in 1971. Thompson died in San Diego, California on December 14, 1975.

Benton F. Thompson was an inventor, too. He was married to Ruth Lee who was a designer and stylist at LaValle Shoes in New York. According to her obituary in the New York Times, she left the company in 1944 to work as a stylist and designer with the footwear division of the United States Rubber Company, which was based in Naugatuck, Connecticut, her home town.

Thompson was inspired by her work; he invented a waterproof wrap-around shoe covering. A PDF of the covering can be downloaded at www.freepatentsonline.com/2432947.html. He received a patent in December 1947.

Obscurity of the Day: Dramatic Events in Bible History

Many syndicates have explored the concept of melding religion with comic strips over the years. Some have tried to inject a little originality by having kids participate (like Jack and Judy in Bibleland) but most have elected to be solemn and sober in their productions, making them equivalent to the typical Sunday school lesson.

This strip, Dramatic Events in Bible History, even used Sunday School Lesson as an alternate title. The strip was a once-a-week production that was typically run on a newspaper's Saturday religion page. Unlike many religious strips, which had long storylines, writer Harlowe R. Hoyt made each strip a self-contained little episode. Walt Scott contributed respectful but uninspired illustrations.

My guess is that Publishers Syndicate sold this strip in batches to papers, because there's not much rhyme or reason to when a given paper ran the strips. Earliest I've found it is in December 1926 (Denver Evening News), and the latest is December 19 1931 (San Francisco Examiner). The feature was only advertised in Editor & Publisher once, in 1927.

Comments:
Scott's art might have been respectful but uninspired, but this is still pretty hot stuff, being pre-Hal Foster and all that. Comparing it to other strip art of the time, and at the risk of being irreverent, if you throw some monkeys and tigers into these strips, you have a decent Tarzan "lost city" strip - a few years before the fact.

I can't tell you how much I appreciate your blog! I've been doing a little digging on "Dramatic Events..." (and others you thankfully point me in the right direction on) and from what I can tell the series appears to have started in April 1926. I've found it in The Evening Star (DC), Birmingham News (AL), and Des Moines Tribune so far.

Hi Paisley Lizard; yes, the online sources have certainly proliferated in 11 years, and it now is quite certain that the series began on April 3 1926. Thanks for the info!