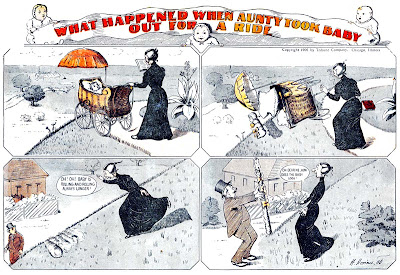 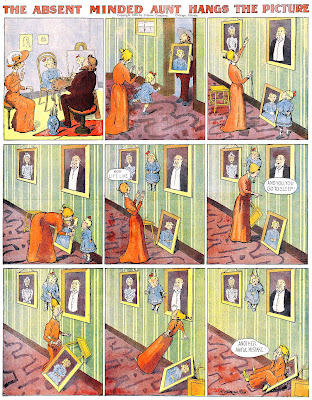 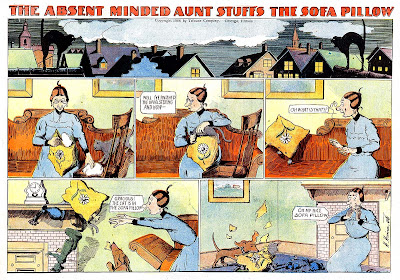 As the story goes, in 1905 a representative of the Chicago Tribune (James Keeley is most often cited) traveled to Germany and recruited some cartoonists to provide fodder for the Trib's comics section. I discussed this arrangement in a long ago post for Hans, another strip from the German invasion. Today we focus on one member of that German troupe who seldom even gets mentioned amidst all the excitement over Lyonel Feininger, the big star of the bunch.

Hans Horina may not have the hoity-toity appeal of the artful Feininger, but of the group he was the only one who really tried to adapt to the way American comic strips were done. Horina's work fits right into an American Sunday funnies section just as if he was sitting in the same bullpen with a group of American cartoonists. Granted, an occasional "wha---?" moment sneaks in (I have no clue what that giant spooney looking thing is in the top strip) but he made a serious effort to blend in, and thus was more popular and lasted longer than his fellow Teutons in the Trib. Today we have examples of one of his longest running series, Absent Minded Aunt. In this series a daft old lady gets into trouble due to her weak eyesight and even weaker gray matter. This could have been a real snoozer because the basic plot had already been done to death in the funnies, but Horina's outrageous gags, deadpan execution and trust in the reader to get the gag without a lot of blah-blah-blah elevate the strip to a higher level.

Absent Minded Aunt ran from May 6 1906 to September 15 1907 in the Tribune, and often had cross-over appearances from another Horina regular, Hungry Tommy.

Much thanks to Cole Johnson for the scans of this rarity!

Comments:
Hello Allan----The bizarre top strip shows the baby rolling down the hill, and somehow gravity has turned the tyke into twisted taffy! Anyone know any more about Hans Horina? I know he came from Vienna, and after his Tribune tenure, he drew a lot of post cards. -----------Cole Johnson.

Hi Cole --
Unlike the others in the German invasion, Horina doesn't seem to have been a magazine cartoonist of any note back home, at least I can find no such references. That, and his extended tenure at the Trib have made me wonder if he wasn't actually part of the same German bunch but maybe actually immigrated to Chicago...?

Any of our European readers care to enlighten us about Horina? Even Lambiek, where I figured I might find some info, is mute on his activities across the pond.

I think these might be the most delightfully demented strips yet posted on the Stripper's Guide.