Obscurity of the Day: Hungry Tommy 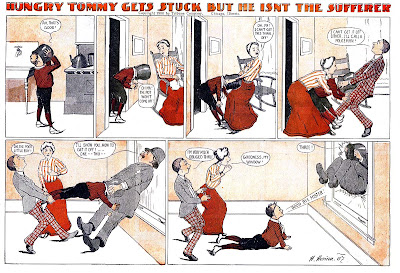 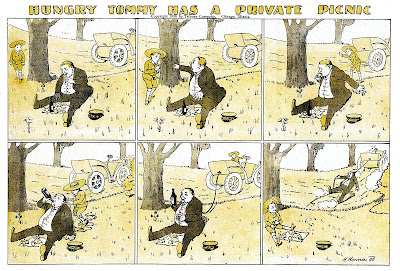 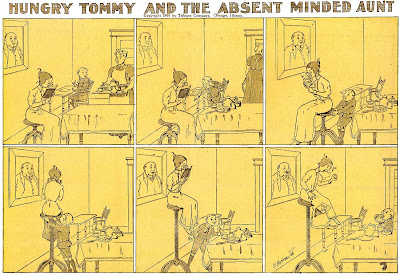 Back to Hans Horina today. We just introduced him on the blog the other day in connection with Absent Minded Aunt, and I figured since Hungry Tommy often co-starred in the same strips with the muddy-minded matron we should give them both some blog-time. So here are some examples of Hungry Tommy by Hans Horina, which ran in the Chicago Tribune from May 6 1906 to September 15 1907, same running dates as Absent Minded Aunt.

Thanks once again to Cole Johnson for the scans!

If you like Horina's stuff go take a look at the portfolio of his Tribune work on display at Barnacle Press.

Comments:
Hans Horina was my great grandfather. He immigrated to the United States after the Chicago Tribune offered him a job for the Sunday comics section of their newspaper. Hans Horina was from Austria and a very well known artist at the time in Europe. Hans orginally came to the US by himself and when he had earned enough money he sent for his entire family. When the Tribune made the decision that the comics that Hans and some other artists were doing for the Tribune did not bring the newspaper added business they let them go. Well, Hans could not afford to go back to Austria, so he began doing artistic work for postcard companies. Eventually, Hans moved his family to Louisville, KY which had a big German community and as they say, the rest is history.

Hi --
Thanks for commenting! I suspected that Hans was an exception to the rest of the Euro crew at the Tribune. Can you tell us what sort of work he was well-known for in Austria? Did he work for humor mags there or something? And after postcards did Hans leave art entirely -- what did he do for work after that? Do you have any photos of him you could share?

hi there, i have a handmade book from 4 german pows in ww2. interestingly all the cartoons in this book are from a hans horina? can this be such a strange coincidence that of all the pows in this camp that a hans horina was obviously the best cartoonist. maybe it was a relative or something. id love to find out some more if anybody here could help. the book dates from 1945-6. many thanks if you have any information, best regards, gary.