Obscurity of the Day: Petting Patty 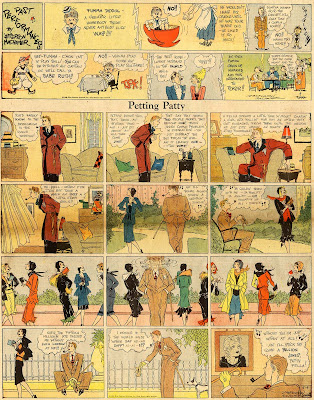 Here's Jefferson Machamer's Petting Patty, a strip that may have set itself up for failure due to its rather risque title. For those who aren't familiar with the old-fashioned term 'petting', it's a synonym for necking, but tends to be reserved for the serious variety where things are getting well past first base. The title was suggestive enough that many subscribing papers used the alternate title Patty the Playful, or simply Patty.

The King Features strip, which starred a hep jazz age flapper girl, began on April 16 1928 as a daily only. Machamer was still pretty young, not yet known as one of the successors to John Held, Jr., but his style was already mature. Despite the appealing art, the strip didn't sell very well, but King must have seen a bright future for it. In September 1928 Patty moonlighted in a series of appearances on Sunday magazine section covers (starting either on the 16th or 30th, sources disagree)*. The magazine cover series was initially titled Adventures of Patty, but the final two installments (11/4 and 11/11) used the daily strip title.

King Features may have gotten encouraging feedback on the magazine cover series, because a Sunday page was soon added to the strip. I can only verify this starting in January, but I wouldn't be surprised if it actually began a little earlier, maybe right after the magazine series ended.

The now Sunday and daily strip continued until September 5 1930. The strip had never sold very well, even with the addition of the Sunday. Machamer, who was now becoming a hot property, probably tired of the grind of a seven day a week strip when he could make more money by freeing up that time for other cartooning and illustration work.

More Petting Patty strips can be seen over at Barnacle Press.

* Carl Linich has since provided proof from the series appearing in the Chicago American that is a good indication the Sunday magazine series began on the 16th -- thanks Carl!