Obscurity of the Day: The Anvil Chorus and Feature Foto Plays 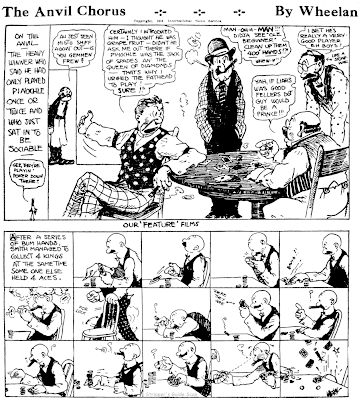 The New York American of the late teens and 1920s is only available in fragmentary form on microfilm. Tis a sad thing. Because of the wide view that Hearst's papers were yellow rags, and worse, that W.R. himself was sympathetic to the Germans in World War I, libraries failed to collect and archive many of his newspapers in this era.

The incomplete microfilming of the American of 1916-1918 is especially distressing because there were a lot of interesting goings-on there that seldom made it into other papers in any orderly form. Among them are the many different series that Ed Wheelan was producing for the American in 1916. Wheelan, of course, was in a process that would eventually lead him to settle down with his classic Minute Movies feature, and in the sample above we see a very early incarnation of that idea in the 'daily topper' for The Anvil Chorus. Here called Our Feature Film, the idea of a film strip would transform several times before it settled down into its familiar later form. In this form, the feature more often went by the title Feature Foto Plays and ran about once a week as the Wheelan 'topper' from February 11 to September 20 1916. I consider this a separate series from Midget Movies, which began as an untitled feature (as far as the record can tell) on January 31 1917.

Luckily, we do have enough microfilmed papers to give a pretty reasonable set of running dates for the main feature, The Anvil Chorus. This feature, which ran in tandem with Wheelan's other series, seems to have first appeared on February 4 and ended on August 15 1916. It had a lot in common with Tad's Indoor Sports cartoons, chronicling the belly-aching and one-upping that goes on when a group of guys get together.

We've featured a few of Wheelan's other early ventures on the blog. Here's Hope and Experience and Always Take Papa's Advice. And here are some early samples of Minute Movies, before it was even titled Midget Movies.

I hear that over on Ken Quattro's Comics Detective blog we're about to be treated to an essay about Ed Wheelan in the next day or two. Head on over -- it's highly recommended reading.