Obscurity of the Day: Pazaza, It's Great! 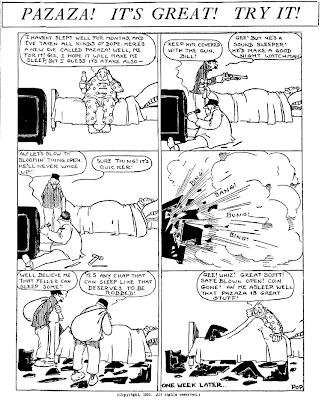 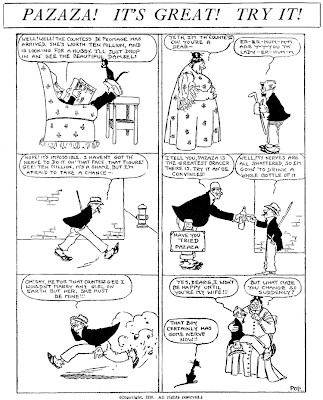 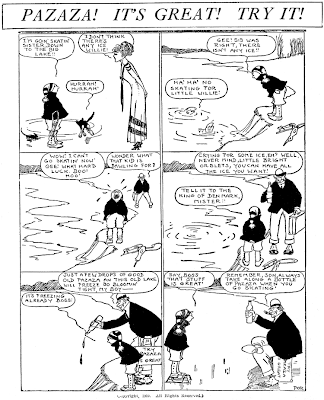 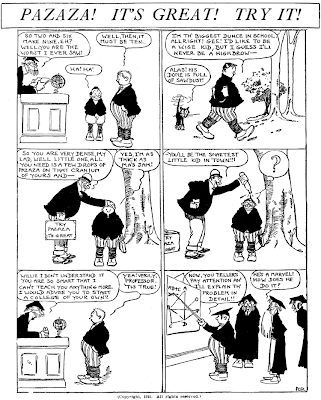 Arthur 'Pop' Momand spent most of his early cartooning years at the New York World, but he did part company with them for awhile to produce Pazaza, It's Great! for the Evening Telegram, the afternoon paper counterpart of Bennett's Herald. The Telegram was notable in the 1900s and early teens for having a constantly evolving and often interesting line-up of weekday comics. Unfortunately their material wasn't widely syndicated, and archived copies of the Telegram itself are quite scarce (this because libraries correctly considered afternoon papers to be comparatively frivolous compared to their morning editions).

Luckily Cole Johnson provides some wonderful samples of this Telegram strip, a particular favorite of mine. Momand's brainchild was deliciously rebellious and snarky. Most newspapers were filled with snake-oil ads at that time, and I don't recall the Telegram being a dissident in that respect, so it's pretty cool that the paper ran this strip which makes blatant fun of such products. In those days the typical wonder elixir was advertised to cure a whole laundry list of aches and illnesses, from the mundanity of psoriasis and warts right on up to cancer and leprosy. Amazing what a little codeine and alcohol can do.

Momand's stand-in for products like Lydia Pinkham's Vegetable Compound, Carter's Little Liver Pills and Dr. Morse's Indian Root Extract was Pazaza, and the strip had it being effective for doing pretty much anything the purchaser could ever dream. Although it was a one-joke strip, it was a pretty funny one with a million gag possibilities. Momand didn't quite make it to the million mark, but he did produce it on a pretty consistent basis from December 9 1908 to September 14 1910.

Comments:
I've never seen this before. I agree with you: its unique gimmick is a lot of fun. I could use a bottle of Pazaza myself.

While I like the base idea and the art, the development in each case seems unremarkable to me. I'd have been more impressed if he'd managed to add a "monkey's paw" twist where the magic elixir works exactly as advertised but things go awry comically from there.

Chris, I wonder if the idea of a "patent medicine" that did everything its salesman said it could do was just so ridiculously absurd that it appealed to the sensibilities of the time. In that strange way it was a fantasy strip that didn't depend on rarebit dreams or anything else to excuse its narrative.