Obscurity of the Day: A Few Dialogues in a Minor Key 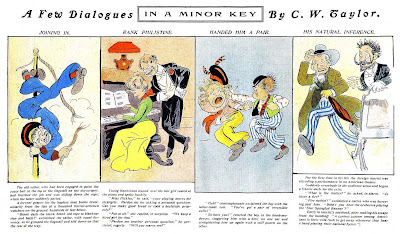 When the Chicago Tribune first bowed to the popularity of Sunday color comic sections and inaugurated their own, they were obviously a little uneasy about the whole concept. For the first few years the section was text heavy, as if they were trying to create something halfway between a funnies section and an issue of Puck or Judge. This feature, A Few Dialogues in a Minor Key, was sort of a last hurrah for that philosophy before the section finally became comics from stem to stern.

The feature, which lasted only a month, was a potpourri of gag cartoons and jokes. The writer, Charles W. Taylor, was a humorist of small note who, based on these examples, never thought up a joke he couldn't obfuscate into a few paragraphs of drivel. The cartoonist was Louis Dalrymple, one of the less gifted members of the Puck crew of the 1890s. He was destined to go insane and die in 1905.

A Few Dialogues in a Minor Key ran from January 18 to February 22 1903 in the Tribune. Thanks to Cole Johnson for the scans!

Comments:
I don't think it's just differing tastes that make these jokes excruciating. Even in 1897 an editor could easily have trimmed them to a dozen words. Win some,lose some.

I wonder what the joke about people rushing for the exits when they hear "The Star-Spangled Banner" refers to.

Hi Joshua --
My assumption was that they played the Star Spangled Banner at the end of a performance back then, and everyone took that as their cue to vamoose. But can anyone explain what the joke is in the one about the sailor sliding down the flagstaff? That one had me scratching my head.

Allan, I think the idea of the flagstaff joke comes from the habit of sailors sliding down the ropes of the old sailing ships. Here the rope breaks, so the sailor slides down the pole instead. Ha ha ha ha you're killin' me...