Obscurity of the Day: How a Man Proposes 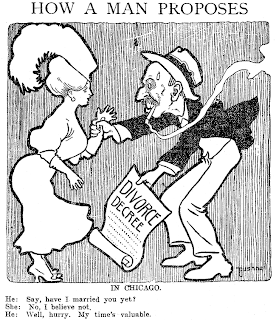 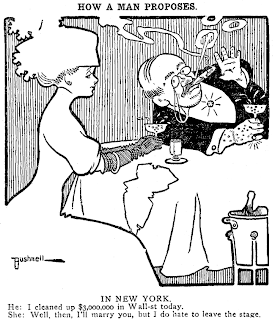 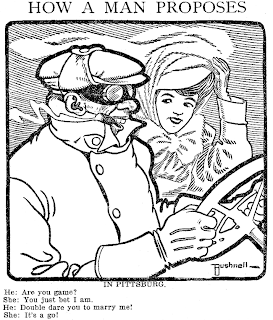 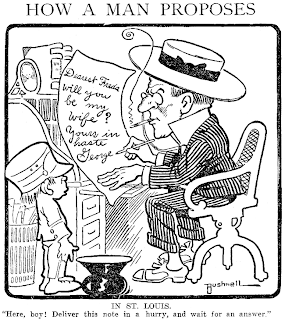 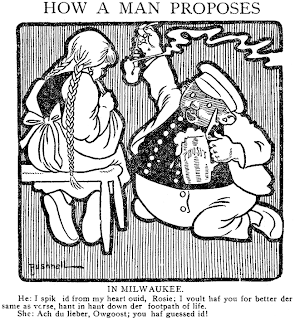 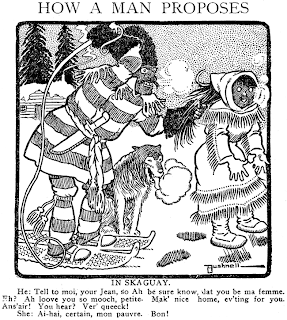 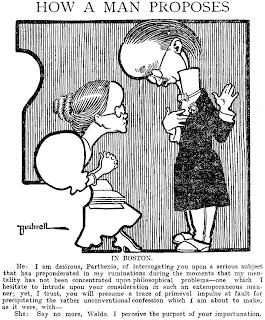 I suppose there's something to be said for turning to the comics page of your daily paper and seeing the same faces staring back at you every day. Howdy Snuffy, how's it goin' Beetle, hey, still lookin' good Blondie. Consistency can be enjoyable, and seeing reliable old friends every day does lend life some pleasant continuity. But back in the nineteen-oughts, before market forces, syndication and lazy editors remade the comics in that cookie cutter mold, you had an experience that is also pleasant -- the anticipation of the new and unknown.

Take How a Man Proposes, for example. Cartoonist E.A. Bushnell penned this series with no thought in his mind about licensing possibilities or how he'd come up with a gag that worked for his feature every day for the next umpteen years. No, he just thought of a cute idea, drew as many episodes of it as he could think up, and consigned it to history. Newspaper readers in the boonies (where NEA, the syndicate responsible, was king) opened their papers on August 6 1907 not knowing what particular cartoon entertainments they might find that day, and what they did find was the first installment of this series, which then ran seven times over the span of the next three weeks, ending on the 22nd. No fuss that the delightful little series was over, just the anticipation for what might come next.

Comments:
Very nicely designed strip. And if you put yourself in the right time, pretty funny too.

The regional characters, like all stereotypes, had a grain of truth to them. Readers of 100 years ago would easily guess a prudish, overly devout figure as a Philadelphian, or a middle class man pushing a pram as a Brooklynite.
Obviously no longer, because just like the funnies you described, we have been lost so much of our regional culture that we're all squeezed into that cookie cutter mold, amush in a mass media murk of mediocrity.

Elmer Andrews "E.A." Bushnell was born in Bloomfield, Ohio in July 1872. His birthplace was reported in the Mansfield News Journal (Ohio) on January 28, 1939, and his birthdate was recorded in the 1900 U.S. Federal Census.

In the 1880 census Bushnell was the youngest of three children born to Wells and Emma. The family lived in Warren, Ohio at 65 Prospect Street. Around 1899 Bushnell married Alice.

Editorial cartoonist, active in Cincinnati (Hamilton) during the early 1900s.
Born in Ohio in July, 1872, he played an important role in the Cincinnati
Post's successful campaign against George B. ("Boss") Cox and his political
machine.

...Foremost in these efforts were the biting cartoons drawn by Elmer A.
Bushnell, who looked to Thomas Nast as his inspiration. Nast, cartoonist
for Harper's Weekly, had helped topple New York City's Boss Tweed.
Bushnell caricatured Cox as everything from a corpulent magnate to a
roaring sea serpent.

According to the 1910 census, Bushnell had moved to Memphis, Tennessee, at 520 Vance Avenue. He gave his occupation as commercial artist for a newspaper. On the move again, Bushnell was a newspaper artist in Cleveland, Ohio, where the couple lived at 987 East 105th Street, as recorded in the 1920 census.

Ten years later he continued his profession in Cincinnati, Ohio, at 970 Locust Street. He was recognized in the book, Ohio Art and Artists (1932); Edna Maria Clark wrote:

A cartoonist with a wide reputation is E.A. Bushnell, who was for fifteen
years or more on the Cincinnati Post. The Cincinnati Times-Star published
his cartoons for a year or two, until his work was distributed through a
Cleveland syndicate. Florida claimed him next, and now he is retired to
free-lancing in Cincinnati. He is a very wonderful draughtsman; his cartoons
sparkle with originality and brilliancy.

The Williams' Cincinnati Directory 1936-37 listed the Bushnell's at 8 Westminster Flats. Bushnell passed away on January 27, 1939. News of his death was published in The New York Times on the 28th.

Elmer A. Bushnell
Cartoonist Formerly on Globe and Journal in New York

Cincinnati, Jan. 27 (AP)—Elmer A. Bushnell, who created Doc, a
short-eared, long-legged dog, for his cartoons a decade ago, died today
of pneumonia. He was 67 years old.

Mr. Bushnell at one time worked for The New York Globe and The New
York Journal. His widow survives.