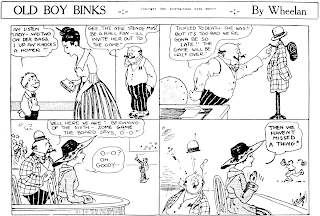 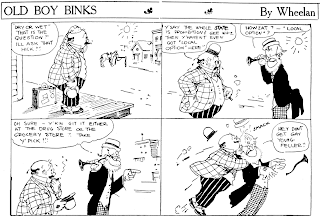 Here's another Ed Wheelan series from his creative coming-out party in the New York American of of 1915-16. Old Boy Binks ran as an adjunct to Wheelan's sports editorial cartoons sometimes, other times as on of his regular weekday strips. Wheelan didn't use this character very often; at the time he was much more enamored of his Old Man Experience series.

Old Boy Binks first ran about June 15 1916 and was last seen on July 29 of that year. Take these dates with a grain of salt, though -- as you may recall, I've commented on the fragmentary nature of the American microfilm before.

Comments:
Interesting early use of of "gay" in the modern sense--especially interesting b/c according to slang dictionaries, the word hadn't yet acquired that sense as of 1916.

Hi Chris --
Yes, that was an oddly prescient turn of phrase, wasn't it? I assume the word was used in its more innocent meaning, otherwise surely the editor would have nixed the cartoon. Homosexuality was certainly not a subject to be brought up in a 1916 newspaper!