Obscurity of the Day: When You Were a Boy 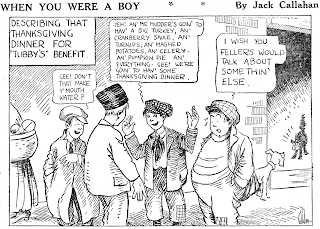 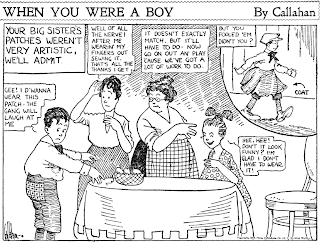 Jack Callahan hit the New York Evening World like a hurricane in the mid-teens, churning out a what seemed like a practically endless variety of strips and panel series. Here's one of his efforts, When You Were a Boy. H.T. Webster and Clare Briggs paved the way with their well-received nostalgic reminiscences about boyhood, and plenty of other cartoonists followed suit with their own interpretations. Callahan's, I think, has to be classified on the mediocre side. The powers that be must have liked it, though, because it ran almost a full year, from April 7 1916 to February 3 1917. In addition to appearing in the Evening World it was also syndicated through Pulitzer's Press Publishing company.

John Thomas "Jack" Callahan was born in Brooklyn, New York on December 14, 1888. Nothing is known about his art training. He was employed at the New York World newspaper. When the crossword puzzle was invented in 1913, Callahan was involved. On February 27, 1938, the Seattle Daily Times (Washington) published the article, The Cross-Words Puzzle's Twenty-Fifth Birthday, which explained his role.

...The drawing of the first diagram was assigned to Jack Callahan, then
a cub artist, now known as the creator of the famous come strip, "Home,
Sweet Home," and was printed merely as miscellany—a curiosity to
help the page.

In the 1920 U.S. Federal Census, Callahan lived with his parents, James and Millie, in Brooklyn at 299 State Street. His occupation was artist for a newspaper. Some of his strips, from this decade, include Hon and Dearie (previously titled as Over There, then later retitled as The Piffle Family in 1922), Freddie the Sheik (1924-1928), and Clarabelle's Cousin (1928-1930). On January 2, 1926 the New York Times reported Callahan's marriage.

Jack Callahan, comic artist of the New York American, and Helen Carr,
who used to dive from the roof of the Hippodrome in the spectacle "Happy
Days," were married Wednesday afternoon at Borough Hall, Brooklyn.
They had known each other since childhood….

…He told only a few intimate friends of his wedding until yesterday, when
the news was made more generally known through announcement cards
of his own design bearing the inscription, "Ringing in the New Year," and
showing the bride and bridegroom standing together inside a gigantic
wedding ring. The couple are living at present at the Hotel Pennsylvania,
where Mr. Callahan has resided for several years.

The couple was profiled in The Dearborn Independent on September 3, 1927. The first page can be viewed at Google Books; Google this line, And She Is Blind By Paul Payton Farrington; next, on the left column,
click on More, then click on Books.

In the 1930 census the Callahans lived in North Hempstead, New York at the Belgrave Square Apartments on Brompton Road. His occupation was an artist working in publishing; his strips included Dizzie's Eating House (1930) and Home, Sweet Home (1935-1940).

Callahan signed his World War II draft card on April 26, 1942; he and his wife lived in Brooklyn at 1775 75th Street. His said his occupation was "Business for self—Artist". During the second half of the 40s, he found work in the comic book industry; some of his credits can be found at the Grand Comic Book Database, www.comics.org/credit/name/jack%20callahan/sort/alpha/

Callahan passed away on August 24, 1954. His death was reported in the New York Times on August 26.

Jack Callahan, newspaper comics strip artist, whose work appeared in
The New York American for many years until 1940, died Tuesday
afternoon of a heart attack while playing tennis near his home, 1771
Seventy-fifth Street, Brooklyn. His age was 65.

Mr. Callahan was best known for his comic strips, "Hon and Dearie,"
"Freddie the Sheik," and "Calamity Jane." In 1926, he married Helen
Carr, the girl who did the sensational dive from the roof of the New
York Hippodrome in "Happy Days" and "Cheer Up." She is the only
immediate survivor.

According to U.S. Veterans Gravesites, ca.1775-2006, he was buried at the Long Island National Cemetery in Farmingdale, New York.

Hi
I thought that Jack Callahan's Dizzy's eating house was In the Sunday paper 4/22/1928 I have this strip from the paper. But I have not looked at it lately. I will have to take it out and look to see if they have it on it. Thank you for all of this information.
Crystalsky