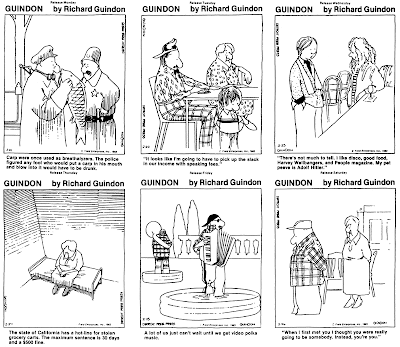 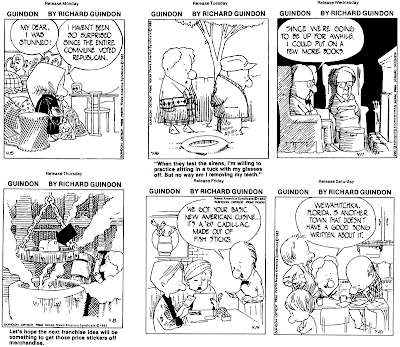 Wish I could find the one where people are sitting around randomly on stools in a gymnasium. Caption is "park board sponsored ice fishing practice"

As a Michigan expat, I also view Guindon as a bit of an inside joke that I was lucky enough to experience. Pretty formative reading for six-year-old me!
Two of my favorites are people carrying a ladder away from a sign reading “Welcome to Detroit,” with a tacked on poster beneath continuing the thought: “A great place to buy a wig.”
And a group of people, pants rolled up, standing in a lake, with little “ooph” speech bubbles rising from the water, captioned “Fish kicking,” and signed “Guindon, who doesn’t understand this cartoon.”

Guindon did wonderful work in Minnesota. He was a staff illustrator on the newspaper, so his income didn't depend on sales to newspapers. He actually starter in the 50s on the campus paper of the University of Minnesota doing a panel character called Hugger Mugger. He then went the Feiffer route for The Realist in New York City before returning to Minnesota. Besides the panel cartoon, he did regular illustrations for stories in the Minneapolis Tribune. Exhibitions of his originals were quite popular in town and sold for decent prices, yet no one outside of the Twin Cities (at the time) really cared about owning one. He had a studio fire that destroyed all his files and most of his original from the Detroit era.

"One problem with the barter method is getting the carp into the cash register."