Obscurity of the Day: Figurin' Sam 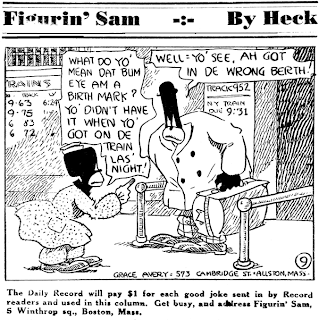 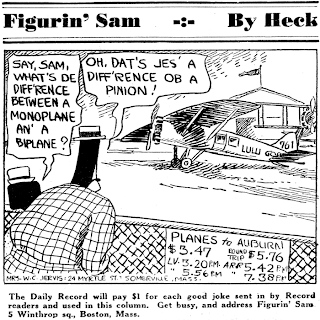 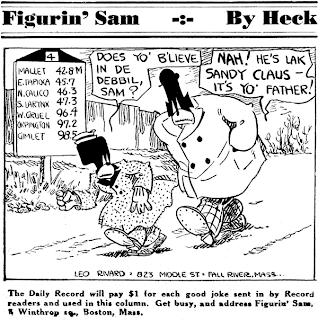 Features that appeal to gamblers have enjoyed a minor popularity, mostly in the trashier tabloid papers. Many were horse-racing strips, but there were also numbers game features. Why gamblers felt that some cartoonist in the newspaper's bullpen had some secret mystical ability to pick lucky numbers is beyond me, but apparently they did.

Figurin' Sam offered up a gag a day (submitted by readers) plus a whole slew of 'lucky' numbers cleverly placed in the background.  It also offers a stereotypical depiction of blacks in perhaps its most elemental form -- our stars are little more than inkblots. The feature was never signed, but in it's early days was bylined by 'Heck'; I have no idea if this was the cartoonist's real name. The feature began in 1930 in the Boston Record, and lasted until at least 1940 if not longer. Around 1932 the feature was demoted to one-column size and the byline was dropped.

For a feature whose existence was mainly to purvey random numbers, the gags are often surprisingly good. Guess those Boston Record readers were a witty bunch. I have a slew of these panels in my collection, and when I read through a batch I was surprised to be chuckling regularly. A few extra samples (minus the mushmouth act):

"What do you think of this? That doctor said he was going to treat me and now he sends me a bill!"

"Sam, there's a machine out now that can tell when you're lying. Heard of it?" "Heard of it? Why, I'm married to one!"

"Imagine, Sam! My uncle worked in a store for $3 a week and in five years he owned the store!" "Oh, I can believe that. They didn't have cash registers in those days!"