Obscurity of the Day: Life On The Radio Wave 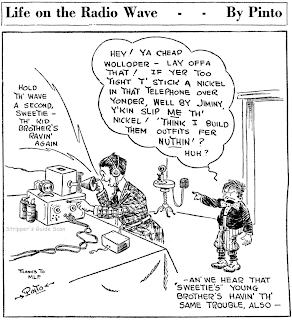 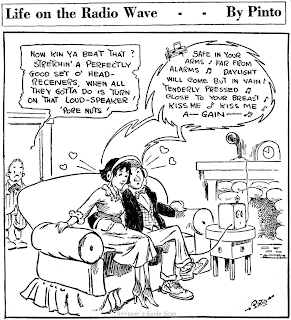 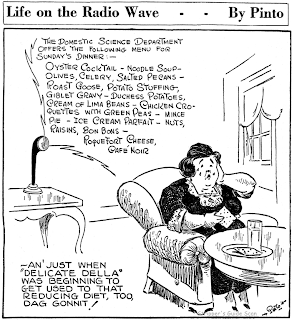 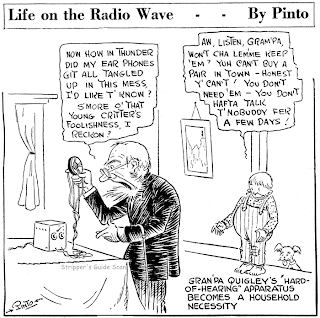 Life on the Radio Wave has twofold interest; an interesting early look at radio coming onto the scene, and a creator who went on to fame (but not as a cartoonist).

This panel feature ran 3-4 times per week in the San Francisco Chronicle from March 26 to August 26 1922, very early for a radio feature. In fact as we can see from these samples the radio was still a homemade instrument at the time, and was being used as a telephone substitute in addition to it's better known role in home entertainment.

The cartoonist, who signed himself just 'Pinto' on the feature, was Vance DeBar "Pinto" Colvig. Colvig never hit the bigtime as a cartoonist, but he had other talents up his sleeve. He was a vaudeville actor, a clown, and ultimately made his mark as a voice actor for motion picture cartoons. He was Bluto in the Popeye cartoons, Pluto and Goofy for Disney, among other memorable roles. He even provided the voice for one of the Munchkins in The Wizard of Oz.

He also has the distinction of being the very first Bozo the Clown, first on read-along records, then on television.

Comments:
This is awesome, I am currently stripping some of these out of the San Francisco Chronicle from June 1922. It's like your post was reading my mind as to what I am doing right now. Thank you for this post. -Steve

I just wanted to let you know that the link to "Bozo the Clown" has moved to http://bozo-the-clown.info/biography-of-pinto-colvig-the-original-bozo-the-clown/

Great blog! Thanks for posting. Love to see more of these Pinto cartoons from this series.