One of the early animated cartoon production companies was the Bray Studio, which churned out a tremendous number of shorts from 1913 to 1927. For a sample of their fare, go check out Bobby Bumps and the Stork (1916) on Youtube. Extra credit if you make it through the whole six minutes of this aimless, herky-jerky stuff.

J.R. Bray himself was an old newspaper cartooning hand, and he brought newspaper pals like L.M. Glackens, Cornell Greening, Sam Loyd, Leighton Budd, A.D.Reed, Clarence Rigby, Milt Gross, Foster Follett, and Carl Anderson into the studio with him. So there was a predisposition in those hallowed halls to think about newspapers. This preoccupation resulted in the studio producing a series of newspaper comic strips to advertise their animated fare. The series was short-lived; it seems to have been actively distributed for only a few months, perhaps in the form of a 10-12 strip offering that was never repeated. The only samples found so far ran in October 1916 - January 1917 (and I think perhaps the January sample could be assumed to be running late). Most strips takes their titles from the company's cartoon productions and presents a gag from that short.

I was informed of this series by Cole Johnson, who sent me images of the strips he's found, and I was able to add some more. So let's take a look at what we have. First we have three Farmer Al Falfa episodes; these were credited to Paul Terry, an important animation pioneer in his own right. Notice in the third one that a suspiciously 'Mutt-ey' character co-stars (Mutt and Jeff had their own cartoon series produced by a different studio). These strips use titles that are slightly different from IMDB's animated film titles (Farmer Al Falfa's Wolfhound, Farmer Al Falfa's Prune Plantation, Farmer Al Falfa Sees New York). I don't know who the artist is here, but it's the same guy who did the Heeza Liar and one of the Bobby Bumps strips below.

Next up we have three of Earl Hurd's Bobby Bumps strips -- sorry, these are in pretty bad shape. The better repro'd square versions of two of the strips are from the magazine Film Fun which ran abbreviated versions of the strips with longwinded captions underneath the panels. IMDB's film titles are the same as the strip titles, except that Bobby Bumps Goes to the Circus is listed as Bobby Bumps At The Circus.

Earl Hurd started his own early animation studio in 1915, with Bobby Bumps, an ersatz version of Brick Bodkin, his New York Herald character. J. R. Bray went into a business partnership with Hurd, as between them they owned the two most important patents in the new field of animation. (Bray invented the concept of transparent "cels" on which the images were drawn, Hurd had created the peg system of keeping the pictures in register. ) You'll see "Licensed under Hurd-Bray patents" on cartoons up to the mid-1930's, when they expired. Note that the art on the lodge episode doesn't stick with Hurd's drawing style for some reason. 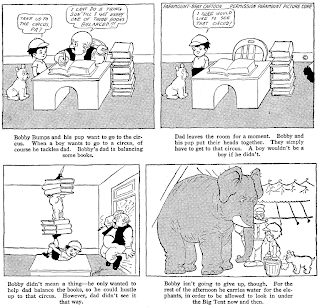 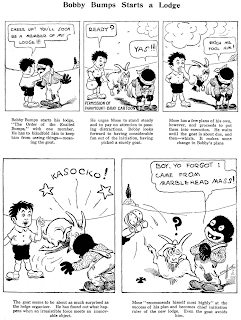 Next up are Colonel Heeza Liar strips from the studio head himself, J.R. Bray. Here again we have three episodes (do I sense a trend?). The first is from the short Colonel Heeza Liar Gets Married, the other two are from unidentified cartoons in that series. One includes a cameo by Carl Anderson's police dog character, who had his own series of shorts.

Finally we finish off with an adaptation of an L.M. Glackens cartoon short. Glackens did a series for Bray concerning a caveman named Haddem Badd. Seems like there ought to be two more, though, don't you think?  I mean, we must be consistent... Have no idea why Glackens' initials are seemingly wrong.

It seems pretty obvious that this series was produced to advertise the films and was distributed free to newspapers. Or perhaps they were distributed to local movie theatres who ran Bray shorts, with the suggestion to pass them on to the local paper. In any case, very few papers printed them and the strips found so far come mostly from backwoodsy titles -- Greenville (MS) Weekly Democrat, Perrysville (OH) Journal, and El Paso (TX) Herald.

If you reader-researchers can find any more episodes from this series (I have the funny feeling that there are two more lurking out there), Cole and I would both be tickled pink if you'd share your finds!

For more about Bray, go to Tom Stathes and Dave Gerstein's website about the Bray Studio.

Thanks to Cole Johnson for many of these scans, and for improving this post with a much needed injection of  his expertise on the subject!

Comments:
Though we're all familiar with the early animated cartoons based on strip characters, would we not regard these as the first strips based on animated characters?

Real treasure! Thanks for sharing!

I did a small monograph a few years ago of some of Hurd's work, including a scan of some sheet music he did (ironically, to celebrate Dr. Frederick Cook's fake conquest of the North Pole), and his political cartoons that he did for a KC newspaper. I have an original of a book of these cartoons.

Sadly, only the issues for September 1916 to December 1916 are available online: http://news.google.com/newspapers?nid=nnVijz9KPVYC

But all in all, an earlier starting date and two new strips, including one new author.

Hello, all---The new strip found by Fram is based on one of Carl Anderson's early series, about a little black native boy and a long-legged ostrich, most popularly known as THE FILIPINO AND THE CHICK, for Pulitzer, ca. 1902, but also appeared as early as 1896 in the first Hearst sections. Looks like Anderson brought them back for one more go-round in animation.

The Wood County Herald (from Ohio) also ran three episodes in November 1916, two by Bray and one by Terry, but nothing new here. Still looking for more appearances and preferably new ones of course...

Fantastic article - very interesting. I have a question. Can anyone tell me which of the three listed newspapers the 'Farmer Al Falfa Sees New York and Calls It' featured in? For example, did it feature in one of the listed papers: Greenville (MS) Weekly Democrat, Perrysville (OH) Journal, and El Paso (TX) Herald?

Any guidance on this would be much appreciated - I am writing up a book and would love to see the original context.

So sorry, Chris, but my samples and notes about this all got thrown on the giant teetering 'to be filed' piles, where they are all but lost until some lazy researcher gets around to doing the filing. That sample was PROBABLY from a paper in newspaperarchive, but could also have been one of Cole's samples. At the moment I can't say for sure. But checking newspaperarchive would be a good move.

I have done research, and I think these were the first strips starring a licensed character out of any media. But I would like to know: did one of the strips appear before the other, or did they all debut at the same time?