Obscurity of the Day: Margy 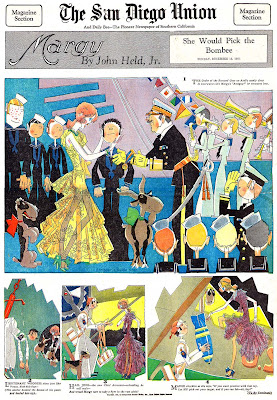 John Held Jr.'s Margy character was featured in no less than three different comic guises. First as a little panel cartoon titled Oh Margy, then as a daily and Sunday strip titled Merely Margy, and finally as a magazine cover series titled simply Margy. We've already covered the first two, so let's finish things off with the Margy series.

By the early 30s Held's flapper girls had fallen out of favor, and frankly he was pretty tired of them himself. But his most famous flapper did get cover featured on the Hearst Sunday newspaper magazines (through International Feature Service) twice after the Great Depression struck. The first series ran from March 8 to June 21 1931, the second from August 30 1931 to sometime early in 1932.

Although Held's artwork is still superb (a bit of a wonder since he was going through some pretty intense personal problems in these days) the writing is almost haiku-like in it's ultra-modern, sophisticated patter. Perhaps Held realized that readers were busy trying to figure out how much of Margy's svelte frame was visible under that chiffon and saw no reason to expend a lot of type on these lovely cover drawings.

EDIT: Cole Johnson writes to tell me that Margy made at least a few one-shot type appearances on the Hearst Sunday magazine covers in 1936. Thanks Cole!