Obscurity of the Day: Turn Me Over 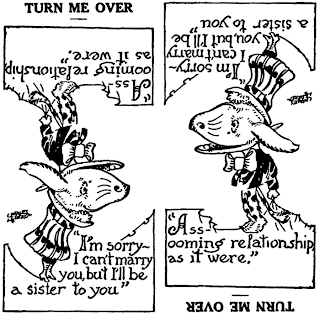 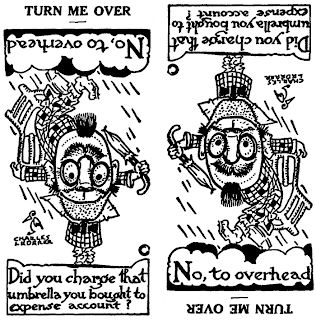 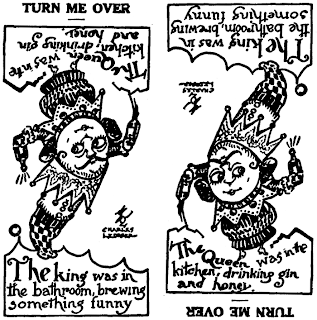 Charles Lederer wanted to turn the world on its ear. He did not just one but two series of the sort where you look at the cartoon normally, then turn it over to (ideally) see an entirely different picture formed from the same cartoon. He wasn't the first nor the best at this genre. In the comic strip realm the gold standard is the famed Sunday comics series UpsideDowns of Little Lady Lovekins and Old Man Muffaroo by Gustave Verbeck. Outside newspaper comics there was Peter Newell's Topsys & Turvys, for my money the true masterpiece of the genre -- see a very cool online animated version of book 1 at NonsenseLit. Also be sure to get a copy of the cheap but excellent Tuttle Publishing reprint of the books (far better than the old Dover editions).

Okay, enough shilling for Newell. Lederer is our subject today. Charles Lederer was an editorial and humor cartoonist, mostly working in New York and Chicago during his career. He never made a really big splash but seems to have been well-regarded. He published a cartoon course in the 1910s that seems to have made him some good money -- it was still being reprinted long after Charlie kicked the bucket.

Speaking of kicking the bucket, Charlie did that in 1925, which means that the Turn Me Over series was pretty much the last thing he published. As bad as it is (if you can make out the drawings both ways on all of these, you're doing at least 50% better than me), I guess we must forgive him since he was pushing 70 and maybe not feeling too great.

The feature, which seems to have run from about March - November 1923 (rather hard to track because papers tended to print it ROP), never carried a syndicate stamp. My guess is that it was self-syndicated, or possibly from Bell or McClure based on the other features I tend to see run with it.

As soon as the original run ended the series was bought up by Western Newspaper Union, and they offered the feature through about 1926 to their clients.

Comments:
Hi Allan, what was the other upside-down series Lederer did?
Marco

We'll save that for another obscurity of the day posting, but here's a clue -- Peter Newell could have sued and won over the title.