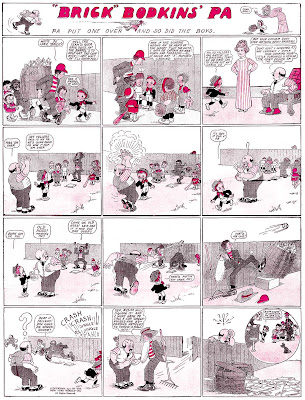 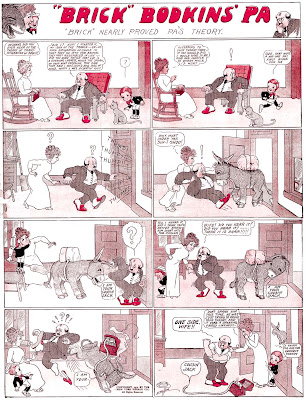 While not the longest lived of Earl Hurd's comic strips, Brick Bodkin's Pa was certainly the most visible, running in the New York Herald's Sunday comics section. Hurd was otherwise mostly confined to the Herald's evening paper counterpart, the Telegram, which was not a big seller. Hurd worked for the Herald/Telegram combo from about 1911 to 1915, and Brick Bodkin's Pa was a semi-regular feature of the Herald's Sunday section from May 12 1912 to April 26 1914. It seems to have always run on an interior page (which is why our samples are 2-color jobbers), the mark of a strip that was not considered much of a pull for readers. And no wonder. Hurd's stiff, mannered art and creaky gags are instantly forgettable.

The strip might not have been a reader favorite, but Hurd must have thought a lot of it. When he left the Herald to start his own animation studio, Brick Bodkin had a name change to Bobby Bumps and he starred in a series of primitive animated cartoons. For more about Bobby Bumps see this post.