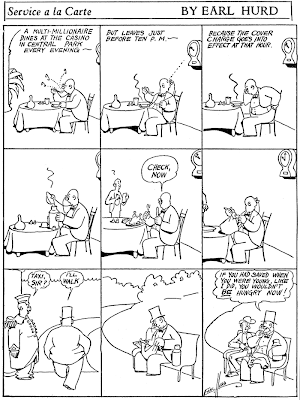 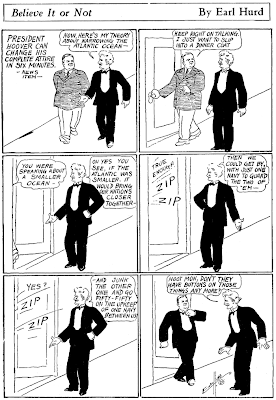 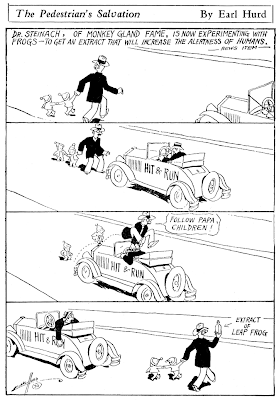 As long as we are 'Hurd'ling along with Earl Hurd trivialities this week, let's cover a much later obscurity from that camp. We discussed Susie Sunshine a long time ago on the blog, but I didn't mention then (cuz I didn't know) that the strip seemed to have gone on hiatus for awhile at its home paper, the New York Evening Graphic. For a span of a couple months Hurd switched gears and did an untitled strip which mostly played off odd news tidbits. This might have been a reaction to the September 1929 cancellation of Ving Fuller's Laffs in the Day's News Dispatches, which covered the same ground.

Evidently Hurd's humorous take on the news was deemed less entertaining than his pretty girl strip, and the untitled strip was dumped to bring back Susie Sunshine. The untitled strip ran during September-October 1929, but I'm lacking exact dates because, as I've moaned before, there is no microfilm for most of the Graphic's run.

Thanks to Cole Johnson who discovered this short run item and furnished the samples!

Comments:
These are wonderful, Allan... thanks!

For those of you not keen to the monkey gland reference in the third strip, I refer you the wonderful and fascinating book Charlatan...

I suspect the main character in the book did much to inspire DeBeck's Brotherhood of Billy Goats as well.