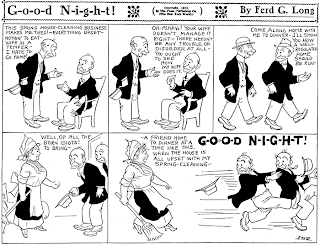 I consider Ferd G. Long one of the newspaper cartooning undiscovered gems of the 1900s and 1910s. His cartoons were a constant feature of the New York Evening World for almost two decades, and yet today you'd be hard pressed to find anyone who has even heard of him.

He was a naturally funny cartoonist; just the look of a Ferd Long strip has you smiling before you get to the reading. And his art was not only funny, but supremely confident and well thought out. Just look at the spotting of the blacks and the economy of line on the examples above -- superb stuff.

Long's only failing is that in trying to get his daily work done, which typically involved not only a strip but also spot illustrations, news illustrations and seemingly whatever else they threw at him, some of his strip work can be perfunctory, humor-wise. Good Night!, which ran in the Evening World from February 27 1911 to December 19 1912, is an example of that. In the early days of the strip there was a great slow burn effect, capped off with the seemingly unflappable protagonist finally losing his or her calm and screaming out "G-o-o-d N-i-g-h-t!" as the other characters scatter to the wind of the oral explosion. Ferd should have dumped the concept when it ran out of gas, but he kept on with more generic gags that didn't really lead naturally to the final outburst (I nominate several of the samples above as illustrations of that).


Now being a Ferd Fanatic, I must point out that three of the four examples above are really unfair to his art. The newspaper that ran the one-tier strips reformatted them that way. And boy did they do a bad job of it. Just goes to prove that some newspaper folks have way too much time on their hands. Why take a two-tier strip, so well-designed for that layout by the artist, and cut it all up, apparently without even the benefit of a straight-edge? It even looks to me like the bottom sample might have lost a panel in the translation -- the second panel doesn't seem to make any sense. Who is he talking about?

Ferd Long is a mystery to me in that his work for the Evening World is drastically curtailed after 1917. In 1918 and 1919 he does a few short series, often fill-ins for other cartoonists, but by and large he is gone. And after mid-1919 he is never seen again. Frankly I expected to find an obituary, and I scanned the Evening World microfilm for months of 1919 looking for one. Considering the severity of the flu epidemic of 1917, my guess was that Long got caught up in that, made a few rallies when he was able to return to the paper for short stints, but then died in 1919. But no obit was found. So a good thing that we have Alex Jay on board, who will fill us in on Long's bio tomorrow.

Comments:
What is the newspaper that cut these strips up and refit them?

Sorry Grizedo, don't know. Those scans came from Cole. The properly formatted one was mine and it came from the Minneapolis Tribune.

Ferd Is my paternal grandfather and passed along creative genes to some descendants. His great grandson, my nephew, is a very skilled artist. Another great grandson is an actor/producer/screenwriter. My father's sense of humor was legendary (John H). If you encounter any more data please let me know.