Obscurity of the Day: Terrible Ted the Boy Bandit 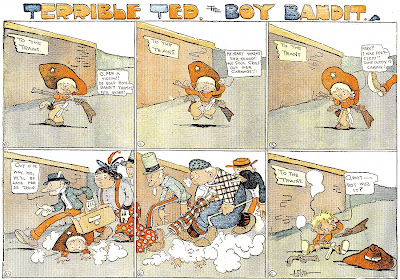 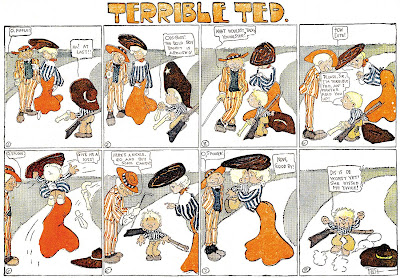 What a shame that we lost Albert Bloch to fine art just as he was really getting the hang of comic-stripping. To see Bloch's advancement as a cartoonist, check out 1901's Constable Hayrick the Rustic Sleuth, an absolute abomination, then 1902's Professor Wayupski, much better drawn but still a little iffy on the progression between panels, and then today's obscurity from 1903, Terrible Ted the Boy Bandit.

Terrible Ted is the work of a confident cartoonist. He's minimizing his speech balloons, his pacing is spot on and the gags are properly executed and very cute. Imagine what he would have been producing another two or three years down the road. Ah well, such was not to be. No, Albert dropped cartooning like a used Kleenex after spending three years at the St. Louis Star. He went off to seek stardom in fine art, and he got a good measure of it. Bloch became associated with Kandinsky (a self-important windbag who hoodwinked the art world into hailing him as a great painter ... but I digress) and was one of his 'Blue Rider' group. Bloch produced some really striking modernist works that were exhibited at the much-discussed avant garde shows of the 1910s, and later became a respected art teacher. To see some of Bloch's remarkable work check out the University of Kansas website.


Terrible Ted ran in the proto-World Color Printing section of the St. Louis Star and a handful of other papers from April 26 to August 2 1903. It was his last work with the paper.