Obscurity of the Day: Do You Remember Your Kid Days? 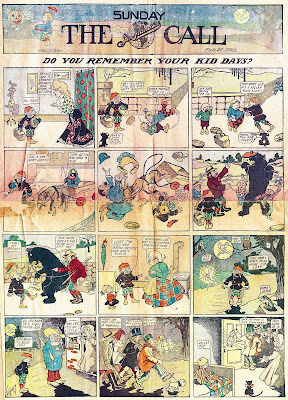 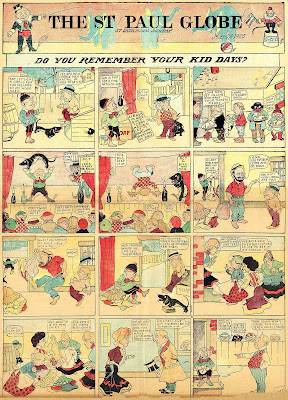 Ed Goewey, one of the yeoman hands at the World Color Printing company in St. Louis, produced Do You Remember Your Kid Days? for their section from February 12 to August 6 1905. A nostalgic look back at the trouble we got into in our younger days, the series is well done but not overwhelmingly interesting. BUT, the top strip above is a pretty darn fascinating entry indeed. I think Ed was under the influence of wacky weed when he penned that one. It makes about as much sense as the typical underground comic.

The bottom sample may be confusing to today's audience, so I should explain that back in those days rag recycling was an actual occupation. Rag-pickers would gather up clothes and other materials that were beyond use and in turn sell them to companies that recycled them. Rags were used in paper-making (you've heard of rag paper?).

Comments:
I don't know about wacky weed, but that first strip is so disjointed that it looks like Goewey was struggling to figure out what ought to come next and how to make it all hang together. The black bear someone just happens to have, the hysterical villagers, and the grandma who changes appearance from one panel to the other is all just part of the odd fun.

The man with the bear is a stereotype of what once would be a familiar sight, the travelling trained bear act. The man(always depicted as an Italian) would make the bear dance for pennies, much as an Organ Grinder with a monkey. In fact there's a comic strip about such a pair, Bruno and Pietro.

Thanks Mark. I assumed it was supposed to be some sort of trained bear act, but it just strikes me as strange ... as well as terribly dangerous.