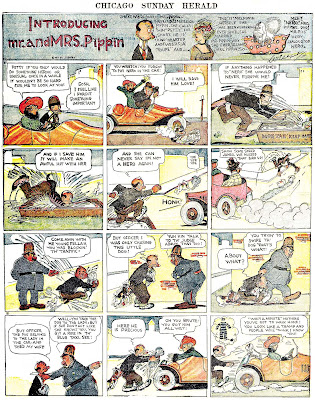 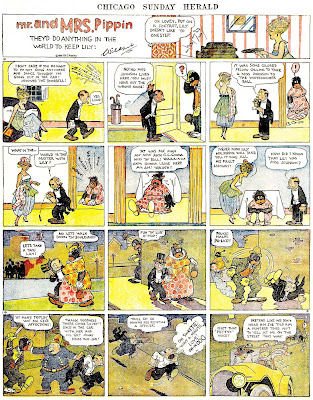 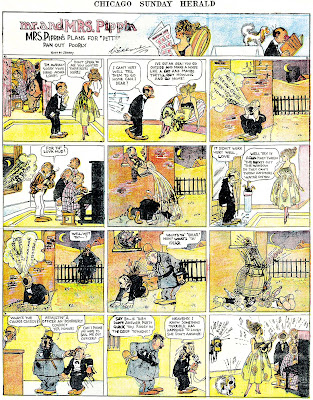 Before Frank Willard hit it big with Moon Mullins, he was a productive staffer at the Chicago Herald. The Herald had visions (more like delusions) of grandeur with their comic strip offerings, which were offered in syndication to few takers. Although they did have some good material to offer mixed in with the bad, the cartoonists were mostly kids, and there was no firm editorial hand to guide the neophytes. There was also an unfortunate lack of attention to printing quality. You can see the terribly off-register color, the type lice and the ink blotches in the samples above. I spent a lot of time cleaning these up so that at least the word balloons are legible -- they were just masses of type lice before I took the virtual scrub brush to them.

What does shine through on these samples very clearly is that Frank Willard, long before Moon Mullins, was already fascinated with the comic possibilities of the lower classes and the seamy underbelly of life.  These strips are very raw-boned and tough-minded, with Willard giving no quarter to the miserable and most likely cuckolded Mr. Pippen. His wife is a tart, a brat and a harridan with no redeeming qualities. The cops, who figure large in their misbegotten marriage, are arrogant and moronic. In short, the strip is uncomfortably realistic -- played for laughs like a funhouse reflection, but leaving the reader with the troubling sensation that Willard knows whereof he speaks.

Comments:
Notice in the second example Lilly's gloves disappear and reappear. In the third, Mrs. Pippin reads a comic section with DeBeck's other Keeley strip, "Married Life".
The final date must have extra significance as the J.Keeley syndicate and the Chicago Herald only had a few weeks left when the Herald was merged with Hearst's Chicago morning paper to form the Herald and Examiner.

Seeing some samples of the Ogden Standard from about that time, I assume World Color Printing may have been the ones to recycle the Keeley strips, just as they had with the leftovers from the Philadelphia syndicates.

That Mrs. Pippin sure is a full-on shrew, isn't she? She makes Maggie from BRINGING UP FATHER look like Mother Teresa by contrast!