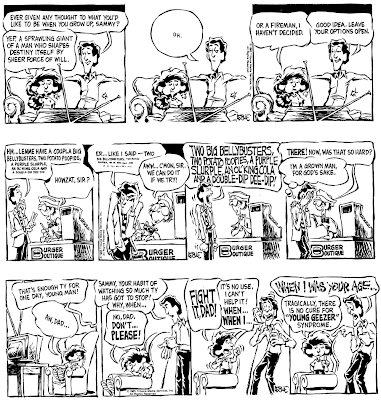 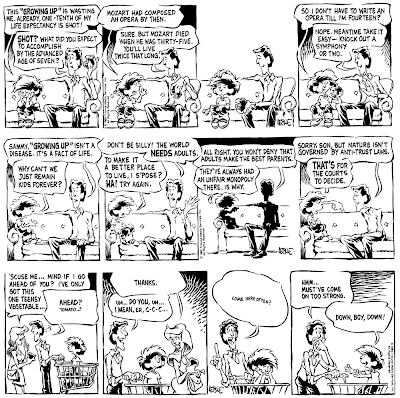 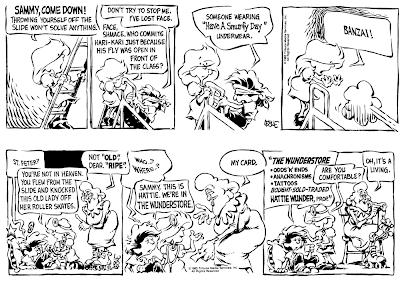 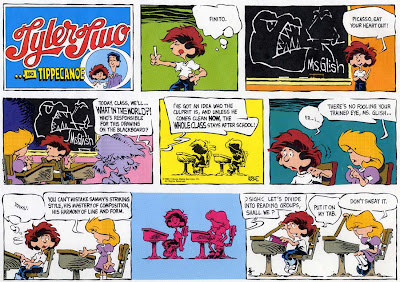 Here's on to be filed under "Unexplained Failures". Tyler Two was a very well-drawn strip that featured a smart-mouthed, fantasy-prone kid, a neurotic single dad, and a small cast of generally solid supporting characters. The creator, Leslie Harris, had a wonderful drawing style that took full advantage of his space, and an ear for dialog and pacing that put across his punchlines with considerable verve. So why in the world did this strip come and go in 1985 with more stealth than a B-1 bomber?

Ignoring the possibility that Leslie Harris (of whom I know nothing) decided to pack it in for a personal reason or a dispute with the syndicate, or that Tribune Media Services didn't promote the strip at all, I can come up with only a few dim possibilities.

Could a strip about a single parent family have been still a little too touchy for newspaper editors at this time? They were the Reagan years, after all, when the 2.5 child, dual parent (one of each gender please) family unit was being heavily touted as the answer to all our problems.

Or was it the frankly awful title? Tyler was the surname of our stars, and Tippecanoe their imaginary home city. Harris failed to point this out on anything like a regular basis (I had to read six weeks of dailies in the syndicate sales package to figure out to what the title referred), so was the obscure title the whole problem? A bad title is not to be sniffed at as a significant handicap -- look how long it took for Peanuts to catch on.

Could it have been secondary character Hattie Wunder? She was one of those energetic, hip grandma types that we all had to suffer with over and over and over in the 1980s and 90s. I don't know about you, but those sprightly grannies drove me bonkers -- I would gladly consign every episode of Golden Girls to the flames of Hell with nary a second thought.

Well, whatever it was that put the Mark of the Cancelled on Tyler Two, it seems like an unfortunate waste of talent. I can't even give you start and end dates. I can verify only that the Sunday ran at least June-August 1985 (EDIT: you'll find likely start and end dates in the comments section below). I've seen not one single daily printed in a newspaper; all the ones above are from the aforementioned syndicate sales package.

I said up top that I know nothing about Lawrence Harris, but that's not strictly true. From the syndicate promo we have this scant information: "the 32-year old creator graduated with honors in fine arts from the University of Pennsylvania ... He smokes cigars and lives somewhere in modern America, which he knows very well." This description is accompanied by a moody, dramatically lit photo that looks like an LP liner pic of The Band member Robbie Robertson circa 1972.

Comments:
Don't you think that most papers carrying "Calvin and Hobbes" might have limited this strip to the smaller markets?

As for feisty granny's, I love Diamond Lil.

I would tend to agree with Michael. 1985 was right around the time Calvin and Hobbes debuted, and it might have been too much competition.

Hi all --
I too noticed that Calvin and Tyler had some surface commonalities. But Calvin probably didn't hurt the marketing of this strip because this one predates Calvin by at least five months. Presumably Tyler would have been making the sales rounds well before Calvin showed up on editor desks.

Allan;
He is Leslie Harris, originally from St. Louis Park, MN. (I went to hig school with him) Les lives in Atlanta these days. Illustrates graphic novels.

Allan, the strip seemed to have made it at least until 1986. I found dailies in Baltimore Sun

Lemme see if The Sun ran the strip in entirety.

So Baltimore Sun did run "Tyler Two", but only in the Evening edition of the paper. The microfilms archive I found only have the Morning edition EXCEPT Saturday, which has ALL the comics they ran, including "Tyler Two" (The Sun never ran the strip on Sundays). The earliest "Tyler Two" daily I can find was Saturday, June 15, 1985, so presumably the first daily ran on June 10, 1985 then.

I want to amend my post about the start dates. I found another paper that ran the strip, The Deseret News in Salt Lake City, UT, and they started running it earlier, on April 22, 1985. Here's the first strip:

Deseret News didn't run the strip long, unfortunately, so I think the end date from Baltimore Sun might be the correct one. Again, this paper never ran the Sundays, so no dates for that.