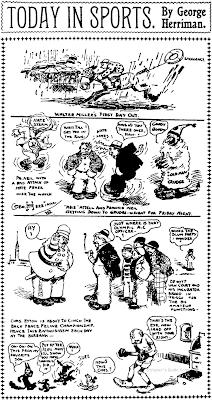 January 27 and 28 1908 --Herriman is off and running with a new series, Today in Sports. Because it is sports editorializing it doesn't qualify for my index (which specifically excludes series of a purely editorial nature), so I'm very glad to be able to share the find here. We'll be seeing quite a few more episodes of this series in upcoming Herriman Saturdays -- and also a new series I bet you've never seen that does qualify for my index. 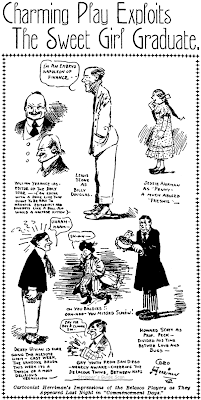 January 28 1908 -- The Belasco's latest production is Commencement Days, starring most of the usual suspects. Although the play got a good review from the Examiner, it seems not to have caught on big, and I find no reference of it being staged after 1909. 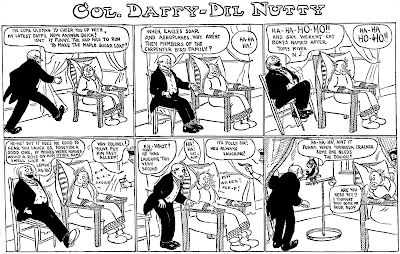 By the 1910s the McClure Syndicate Sunday funnies sections were become more and more a patchwork of reprints and barely professional work.Colonel Daffy-Dil-Nutty is a good example of this trend. The strip, which lasted a little over a year, was a sort of Foxy Grandpa knockoff. Not truly awful, just sort of -- there. No serious energy was expended on either art or gags. In this example I would bet that the Colonel's lame lines came straight out of the filler in the back of a bad joke book. 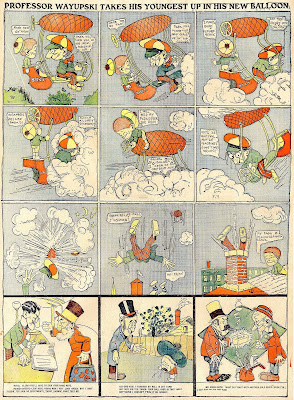 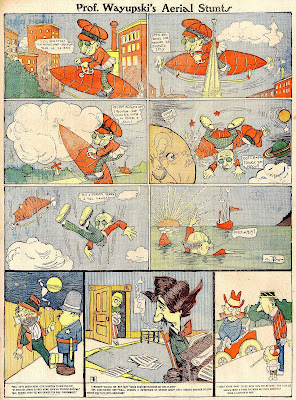 Obscurity of the Day: Have You Ever Noticed?

Here's an uncharacteristically low-key series from that master of slapstick mayhem, George Frink. Have You Ever Noticed? Ran on the Chicago Daily News' weekday comics page from February 7 to April 12 1902, appearing a total of nine times in that period.

Comments:
Haha I love how his wife couldn't come to the retreat... 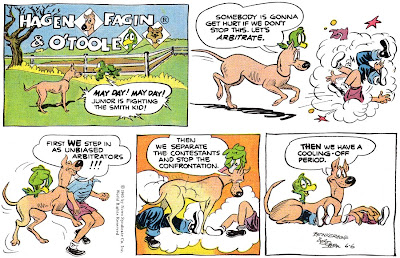 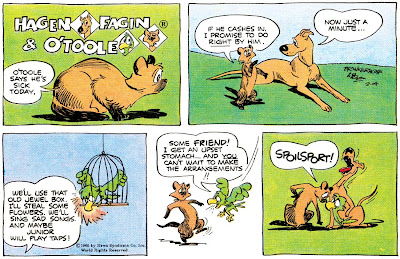 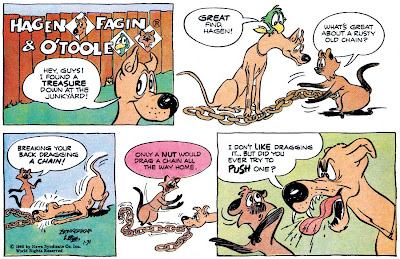 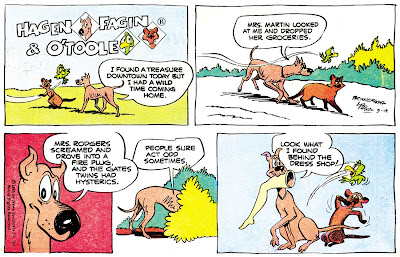 Sorry about the lack of posts since Thursday. Blogspot sorta had a little existential crisis last week, sending some of my posts into slumberland for a time. Thought I'd give it some time to get over its hiccups rather than risk the loss of my deathless prose.

So anyway, today we've got Animal Wise Cracks by Ralph Wolfe. This was a New York Evening Graphic strip, begun in September or early October 1929, that didn't fit the mold of their usual material. The Porno-Graphic readership was pretty much limited to adults (we hope), so why run an animal strip obviously aimed at children (and rather dull ones at that)?

Well, to ask why the Graphic did anything is to assume a level of intelligence and planning that simply didn't exist at that zany paper. So I'm also not going to ask why the strip was renamed Animal Wisecracks in 1930, or why it was advertised in E&P as Animal Antics. Or why the strip was apparently distributed both by the Graphic (as MP Inc.)  and McNaught Syndicate. No, I'm just going to say that it expired sometime in 1930, and that it seems to have been Ralph Wolfe's last syndicated newspaper strip.

Ralph Allison Wolfe was born in Cherokee Nation, Indian Territory (Oklahoma) on August 19, 1894 as recorded in the 1900 U.S. Federal Census. His father, James, was Caucasian, and his mother, Kate, was half-Cherokee. Ralph was recorded as "three-quarter white"; he was the fourth of six children.

In 1910 Wolfe's older siblings had moved; he and two sisters remained with their parents in Vinita, Oklahoma at 101 Miller Street. Some time later, the family moved to Los Angeles, California. Wolfe signed his World War I draft card on June 5, 1917; his occupation was caddie at the Los Angeles Country Club. His description was medium height and build with green eyes and light hair.

Wolfe's mother was the head of the household in 1920; they lived in Los Angeles at 1260 West 51st Street. His occupation was cartoonist in the moving pictures industry. Apparently in the late 1920s he moved to New York City where he worked on a number of comic strips.

In the 1930 census Wolfe was a lodger at 14 West 68th Street in Manhattan; his occupation was cartoonist for a newspaper. Who's Who of American Comic Books, 1928-1999 lists his animation employment at Disney, Warner Bros., and Fleisher studios in the 1930s; when he returned to Los Angeles is not known. During his time at Warner Bros., his name was "hidden" in the cartoons, Have You Got Any Castles?, gregbrian.tripod.com/hidden/hid03.html; and Speaking of the Weather, gregbrian.tripod.com/hidden/hid01b.html.

Wolfe wrote "and now — The Painted Voice" for the Watson-Guptill publication, Art Instruction (1939); "an article describing the new 'shorthand' of hand-drawn sound invented and patented by Dave Fleischer of Fleischer Studios, Inc., Miami, Florida…" Edan Hughes (Artists in California, 1786-1940) wrote, "…He worked for 40 years as a cartoonist for Disney Studios."

According to Who's Who, Wolfe free-lanced in the comic book industry during the 1940s into the early 1950s. The date of his marriage to Enola Richardson (1905-1987) is not known. Wolfe was 90 years old when he passed away on June 20, 1985 in Los Angeles; he was buried at the Los Angeles National Cemetery.

These are Wolfe's animation credits as they appear on my "Albertopage" website:

I'd like to add that at Warners Wolfe's name inspired the character Ralph Wolf, who appeared in several Chuck Jones-directed cartoon shorts along with Sam Sheepdog.

It sounds like the "Chollychap" statue is an unlicensed Charlie Chaplin figure.