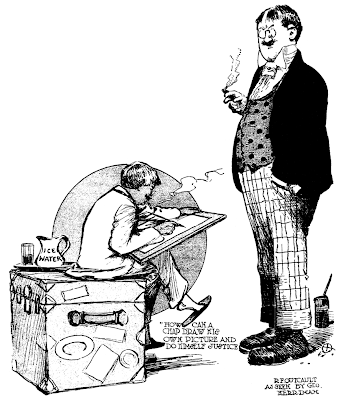 Sunday, February 16 1908 -- Two cartooning giants meet! Herriman sketches Richard Outcault when the creator of the Yellow Kid and Buster Brown visits L.A. I'd bet that Herriman probably conducted the accompanying un-bylined interview as well. You say you're dying to read the article? Well, you'll have to wait until Monday's blog post! 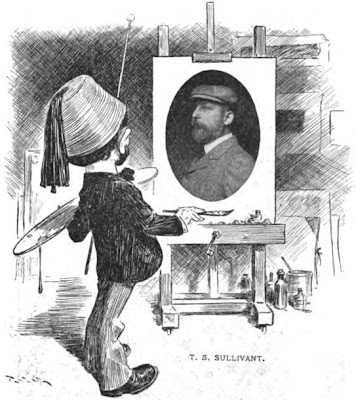 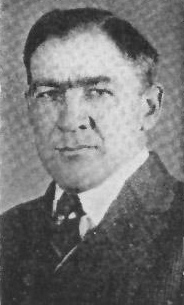 Indianapolis, June 3—(AP)—Chic Jackson, who created "The Bean Family," cartoon strip for the Indianapolis Star nineteen years ago, died suddenly today. He was 57 years old.
He was stricken with a heart attack a few feet from his office door as he left his office this afternoon, and died a few minutes later.
The activities of the "Beans" had spread in recent years to other middle western and eastern newspaper comic pages, but they remained a typically Hoosier family. One feature of the strip drew especial notice—the characters grew older as the years passed. "Woodrow Bean," a foundling on the Bean doorstep in 1914, now is a freshman in college.
Chic Jackson was born Dec. 31, 1876, in Muncie, Ind., where he attended school and was employed on the Muncie News when it was absorbed by the Muncie Star.
There he met Margaret Wagner of Springport, also employed on the newspaper, and they married on 1902. He was an illustrator and front page cartoonist.
Jackson and his bride went to Chicago, where he studied at the art institute, and then came to Indianapolis in 1907 to become artist on the Star. At first he did Sunday feature illustrating, later developing the Bean family.
Mrs. Jackson survives, with two sons, William Charles Jackson of Indianapolis, and Richard Wagner Jackson of South Bend. Two brothers are Dr. Frank Jackson and Warren Jackson, both of Muncie.
Funeral arrangements had not been complete tonight.
Kokomo Tribune (Indiana), June 4, 1934
[According to the 1880 U.S. Federal Census, Charles Bacon Jackson was the youngest of four sons born to William and Sarah, whose name was not recorded; her name was found in the 1870 census. The Jacksons lived in Muncie, Indiana. He and his father were recorded in the 1900 census; they resided at 1100 East Main Street in Muncie. Jackson married on September 17, 1902 (Indiana Marriage Collection, 1800-1941 at Ancestry.com). His father passed away on November 20, 1902 (Muncie County Health Office). In 1910, Jackson, his wife and two sons lived in Indianapolis at 924 Hamilton Avenue. His comic strip Roger Bean began in the Indianapolis Star on April 22, 1913. Jackson signed his World War I draft card on September 12, 1918; this document had his middle name. The family remained in Indianapolis at 3029 Broadway Avenue in the 1920 and 1930 censuses. Lastly, there was a Roger Bean Coffee advertised in the Indianapolis Star.] 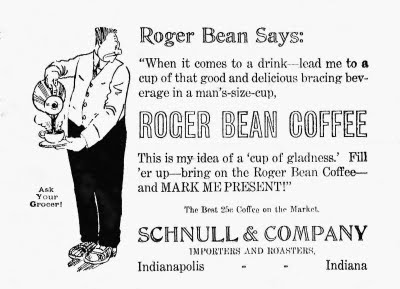 Comments:
Roger Bean was a much beloved strip in it's time, among the earliest of what we could call a proto-comic book featured a collection of his strips.
The Manchester N.H. Leader ran it for almost exactly twenty years, from June 1914 to June 1934.
When Jackson died they ran a cartoon tombstone at the top of the funnies page that day, memorializing him.

Hi, I'm working on a project for Beech Grove Cemetery where Chic Jackson is buried and I was wondering how to go about getting the copyrights to your photo. Please let me know if you can help! 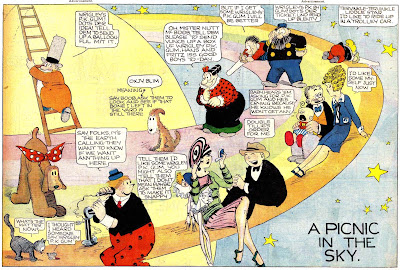 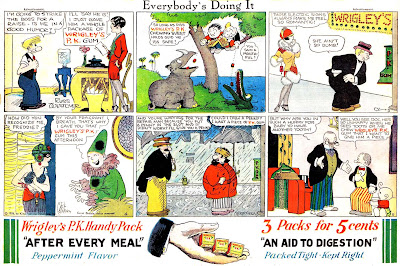 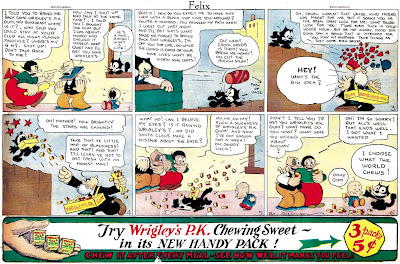 Last batch of Wrigley Sunday comic ads today. First we have a nice jam page, published October 9 1926, with characters from the Katzenjammer Kids, Tillie the Toiler, Boob McNutt, Toots and Casper and Freddie the Sheik.

Finally, bringing up the rear, we end with Pat Sullivan's Felix, presumably ghosted, as always, by Otto Messmer. This one was published May 1 1927.

Thanks to Cole Johnson for the scans of all these great ads!

Oh, and if you're wondering what in the world P.K. stands for, it's Philip Knight Wrigley, son of William Wrigley the gum magnate. All together now .... awww, isn't that sweet.

Comments:
Would these ads appear in a comic section outside of the Hearst chain?

Hello----Going against the trend of the actual artists contributing to these ads, the "Everybody's Doing It" episode has the Toots and Casper panel by Doc Winner.

Hi Mark --
I haven''t seen them elsewhere. I'd guess that Hearst volunteered the services of his cartoonists for this probably exclusive ad campaign. I wonder how many other ads there were in this series though?

Since King Features produced these, I wonder if "Tad" ever did one?

Never heard of Freddie the Sheik!

That's ought to be a Obscurity of the Day feature to talk about!!! 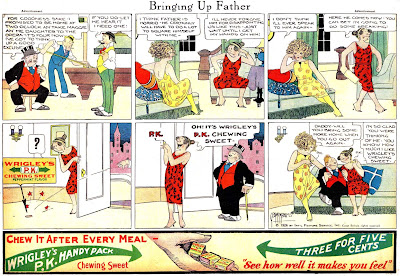 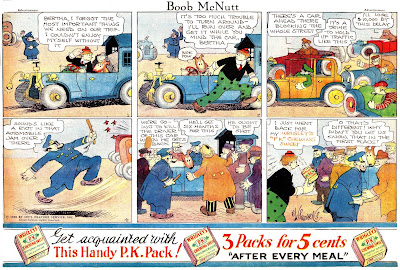 Comments:
Was PK chewing sweet a precursor to chewing gum?

Hello---Wrigley's "P.K." (Named after the founder's son, Phillip K.), is still marketed internationally. It's really just chewing gum, here being called a "sweet" to make it seem a little classier, I guess.--- 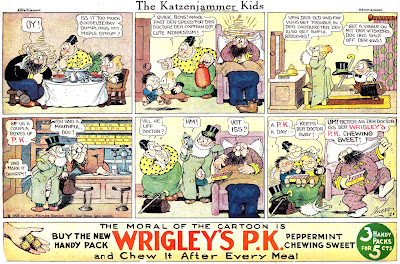 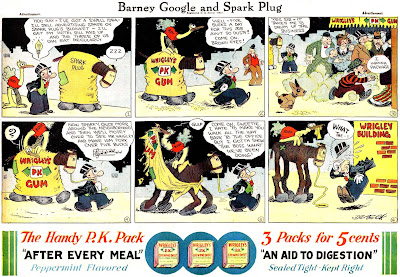 Courtesy of the Cole Johnson archives, we have with us for three days a series of Wrigley's gum ads penned by the leading cartoonists of King Features. These ran in Sunday comics sections in 1926-27. We begin with the Katzenjammer Kids by H.H. Knerr (originally published March 14 1926) and Barney Google by Billy DeBeck (May 9 1926).

(By the way, I posted last week that Cole was being chased around by a surgeon with a knife. Well, the report is in; Cole was indeed carved up but came through the ordeal and is home again breathing those refreshing old newspaper fumes.)

Comments:
Good to hear Cole is well.
What was the first advertising strip? Was it these?

Oh my, no. Assuming you mean advertising strips using licensed characters, they go further back. I recall seeing Mutt & Jeff ad strips, pre-1910 if I recall correctly. I can't think of any actual STRIPS earlier than that, but of course advertising using licensed characters goes right back to the Yellow Kid. I bet there are earlier strips than the M&J, too, but they're not coming to mind at the moment.

Wasn't there also at least one in this series where all (or at least six) Hearst cartoonists collaborated, each doing one panel with their characters? 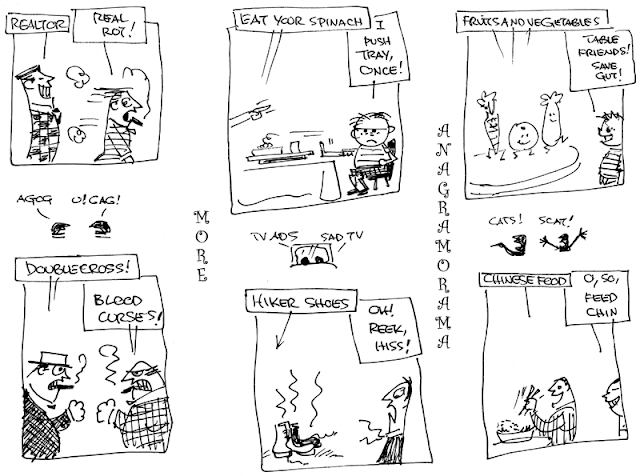